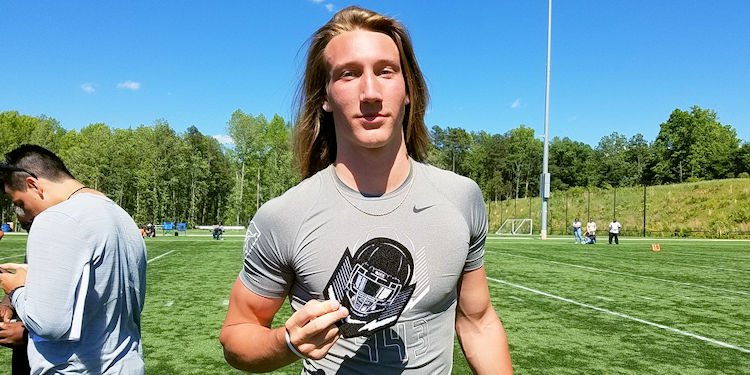 Twice in a Generation

When Deshaun Watson committed to Clemson, I was like many in that I thought he was a once in a generation quarterback. What I didn’t know at the time was the next Generation was a few short years away. Trevor Lawrence played on ESPN Saturday night and showed the country what we have known for a while now. He is the next superstar quarterback coming to Clemson.

Like Watson, Lawrence plays in the state of Georgia and is close to breaking all of Watson’s passing marks. So far through 46 games, Lawrence has 700 completions in 1,122 attempts for 11,234 yards and 126 touchdowns with only 21 interceptions. He also has 114 rushes for 513 yards and nine touchdowns.

Like Watson, Lawrence started early in his career and has won a state title. In fact, he has two. So far, Lawrence has a 44-2 record with a 32-game winning streak. His Cartersville team is going for a third consecutive state title.

Several of Lawrence’s throws Saturday night revealed what coaches have seen for years. He can make all of the throws. Saturday night he had an impressive deep back shoulder completion. He zipped two long balls on posts routes. He had an amazing throw across his body for a long touchdown. He even made some nice gains on the ground. Lawrence does the little things well. He is a rare high school quarterback that looks safeties off. He also has the natural ability to feel pressure coming and has the feet to move around in the pocket and escape the pocket when that is required.

What Watson could do that we don’t yet know about Lawrence is how he will react at the next level. I have said many times that the two most important attributes a quarterback can posses are mental and physical toughness. Regarding physical toughness, we all remember Watson beating South Carolina on one leg due to a torn ACL. We have all seen him take a beating then get up and make a play on the next snap.

Regarding mental toughness, I ask one question, “Did you ever see a moment that was too big for Deshaun Watson?” The moment wasn't too big in his first game in Athens, GA, in his two trips to Tallahassee, his three games against the arch rival, in his two ACC title games, his two national playoff games, or the two national title games. He always rose to the occasion. He also anticipated as well as any quarterback I have seen at the college level.

What we don’t know about Lawrence is the mental toughness or physical toughness at the college level, but in our sample size he has shown us in high school, he passes those tests as well.

One thing both players have done at their advanced high school career is play at a high level, and both showed the ability to handle success. Success only made each quarterback hungrier for more.

At Clemson, we were very fortunate to have a once in a generation talent like Deshaun Watson. We are extremely blessed that we get to see it twice in such a short time frame.