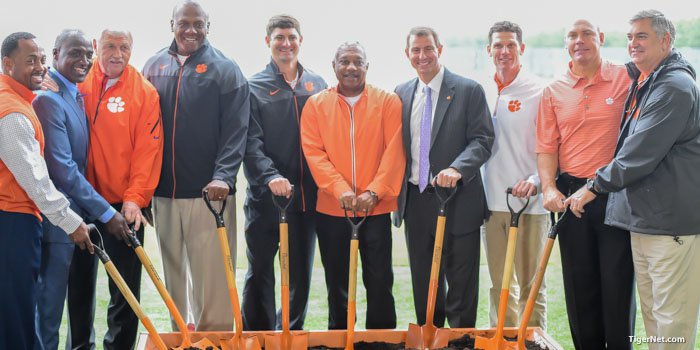 I know some of you live close to Clemson and are around campus often, but for those of you that haven't been around recently, you would not recognize the place. Cranes, hard hats, construction cones and restriction fences are as prominent Tiger paws in Clemson lately.

On campus, the Core Campus project, located behind the P Plant, is coming along nicely and should be finished by the fall. Douthit Hills is the massive project across from the President's house that is also coming along at a rapid pace. Downtown Clemson has several off-campus apartments going up.

Athletic construction is an important part of what is going on as well. Obviously, Littlejohn Coliseum renovation is that sonething many of you have followed. Progress can be followed at clemsontigers.com, but in case you haven't been here in a while, you wouldn't believe the progress. I am told that the project is on time and on budget. Some items may have been cut, but the project looks like a success at this stage. They have internal and external webcams at http://www.clemson.edu/webcams/?DB_OEM_ID=28500&q=littlejohn.

For those that park in Lot 13, you may have followed the new soccer practice facilities. This project started a few weeks ago and should be ready for fall practice for the soccer programs. You can also follow this progress at that link on clemsontigers.com.

The reason the soccer teams are being moved is the new football operations building going up behind the football practice fields and indoor football facility. I go by three or four days a week to check the progress, and I am amazed at how fast the work is being done. Dabo has been very optimistic about a move in date, but maybe his optimism is carrying over to this project.

The construction may be controversial in some circles. It may cause some inconvenience. But I love seeing the progress. I don't know what the economy will look like in the future, and I don't know what interest rates will look like or how bonds will affect future projects. What I do know is that we have seen Clemson when it stops building, and we have seen Clemson when it grows and stays ahead regarding facilities. We are better when we lead instead of when we follow. I will sacrifice parking for seven days a year for our student-athletes to have a better experience while they are here.

Finally, I have seen what the competition is doing, and they are not waiting on Clemson to help them decide what to do. They are building. They are moving forward. Therefore, we have no choice. I loved this past football season, and I want more like it. I loved watching the men's soccer team's success, and I want more of it. I have seen the first 20 games of this baseball season, and I like it. So, let's do whatever it takes to give our programs every chance to be successful.

I have been asked several times about how long freshman sensation Seth Beer will be at Clemson. I have checked with several sources and both rules that apply to Division I baseball players apply to Beer. All Division I players are not eligible for the MLB draft until after their third year of competition. The only exceptions to that rule are the players that turn 21 before the MLB draft. Beer won't turn 21 until September of his junior year, so he will not be eligible for the draft until after his junior season.