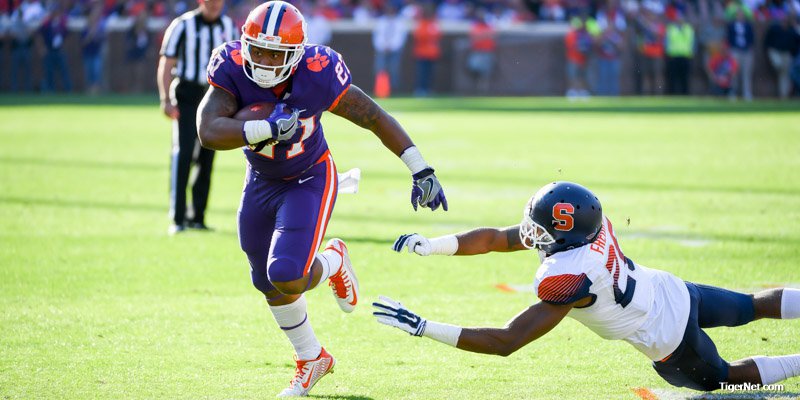 This one was not the heart stopping win like what we saw in Tallahassee or against Louisville, but my heart needed a game like this.

Clemson's win over Syracuse surprised me. I had this one pegged as a 21-24 point margin. I also had Syracuse scoring about 21 points, so a shutout and 54-point win was a pleasant surprise.

Granted the game changed when the Orange lost their starting quarterback, but the result would have still been a win. Clemson dominated in every aspect of the game.

Perhaps the only negative was Deshaun Watson leaving with a shoulder injury. I know Dabo is overly optimistic about recoveries, but I am trusting him when he says Watson will be OK.

The weather was great. The Military Appreciation Day was once again on point, but the best part of this day was seeing Clemson's depth shine.

I thought Watson and Nick Schuessler were fantastic. They combined to go 24-33 for 346 yards with four touchdowns and no picks. The quarterbacks spread the ball around and the receivers looked like WRU again. Artavis Scott had seven catches. Mike Williams and Deon Cain had over 100 yards receiving. All three had touchdowns including Cain who had two scores.

The running game was solid. I thought C.J. Fuller had his best game. He showed vision and a burst. Tavien Feaster showed some toughness between the tackles as well.

The offensive line played a bunch of players and the three true freshmen (Pollard, Anchrum, Simpson) looked fantastic. This offensive line is looking better each week.

Defensively, Syracuse came into the game as the ACC's second best offense, but was shutout and held to 277 yards.

It was nice to see younger players like Trayvon Mullen, Tanner Muse, James Skalski and Tre Lamar. This kind of experience will pay great dividends for the next few years.

Special teams were not outstanding, but a missed extra point and a big kickoff return did not hurt.

So this win might not be as memorable as the epic battles this season, but it was exactly what was needed at this point in the season.