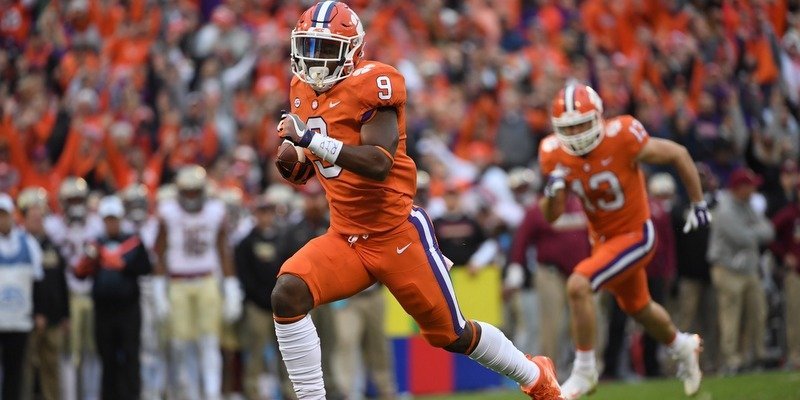 So let's get this out of the way early, Clemson is better than South Carolina and rightly won the game. During the game I thought both offenses were good and imposed their will during much of the game, especially the run game of the Tigers. After sleeping on the game and looking at the stats, I still think the offenses made plays but honestly, those were 2 horrible defenses on the field. Against a depleted defense, Clemson gained over 700 yards but against a well and rested defense, South Carolina gained 600 yards.

All Tiger fans who can read know that Coach V will be starting over next year and South Carolina is doing a much better job recruiting and because of all the injuries, have played a ton of players on defense. I don't think it is doom and gloom and 1 bad game on defense does turn the rivalry around but the warning shots were fired all over the field.

Duke showed the recipe to beat Clemson with the quick passes all over the field but did not have the athletes or the offensive line that South Carolina did and it showed. A Pitt team that is not very good is in the way of a Playoff spot and hopefully the defense will find a way to stop Pitt enough for a win in the ACC Championship game. Remember the last Pitt game and our linebackers trying to catch up with wide open tight ends all over the field? As far as a Playoff goes, I sure hope that the Committee keeps Oklahoma home or we get to play Notre Dame in the first game. If you were dizzy watching Bentley chew up and spit out our defense, take some medicine if we have to play Oklahoma because Murray is faster than any player on our team and can throw it all over the field. If we are fortunate enough to beat Pitt and then win the semi game, a game against Bama might be even more high scoring because Tua is the best Alabama quarterback I have seen in many, many years. Get some sleep, d backs and Coach V because you will need it.

It’s obvious a lot can change over 365 days, and Clemson and South Carolina could look much different next November. However, I will take my chances with Lawrence, Ettiene, Higgins, Ross, Rodgers, Kendrick, Thomas, Henry, Terrell, and the rest of Clemson’s four and five stars next year.

I expect to win the ACC this week because Clemson is the better team and that will play out Saturday night.

Once you get into the playoffs, all bets are off. They will be playing great teams who have had great years. Every year, the goal is to win the ACC, then take whatever comes next. We have not seen the number one seed win the national title since the playoff began because of the great level of competition.

While Alabama, Notre Dame, Ohio State, Oklahoma or Georgia present a lot of issues, so does Clemson. I will wait to worry about the playoff when we get there. Until then I will just enjoy the shot at 13-0 and another ACC title this weekend.

Coach Venables and his defensive staff are very aware of the issues they have and what challenges are ahead. I trust Venables to give us the best chance he can to win.

Watching the Palmetto bowl made me think of a question. USC seemed to have injury after injury throughout the season and the game. I can’t recall a time where Clemson has struggled with injuries. Is it just that Clemson has a lot of talent and can plug in players after injuries or do they have a plan to prevent injuries (flexibility etc)?

Great question. You may be right that Clemson has so much depth that players have been able to stay away from major injuries. Your answer is as right as anything I can come up with. They work hard in strength and conditioning and nutrition to give them the best chance to stay healthy and I am sure that plays a factor as well.

I keep hearing how everything starts up front. If we can agree upon that, then they must be getting better on the offensive line. This offense will score more points and gain more yards than any offense in school history. I can’t see that happening without good play up front.

Next year Cervenka, Simpson, Anchrum, Pollard, Bockhurst and Carman comeback. Hyatt will be missed, but I expect more offensive records will be broken next year.

They would love to add Webb and Putnam in this class. The 2020 class already has three offensive line commitments and could be one of the best in several years. So it appears they are getting better.

Hope you and your family are doing well. Thank you for getting back with me on my previous post on Shaq Smith, it compliments your caring for your readers, fans, etc.

I've actually been listening to you since you aired for the first time, and I have always valued your assessment and opinions on Clemson football, so thank you for that!

I completely agree about Shaq Smith, he had his best game against Duke last week. Hopefully, he keeps improving and becomes a main contributor to the Tigers D!

In the Duke game, I noticed in the first quarter than Chad Smith was playing a good bit in Trey Lamar's position. Was this by design because of Duke's offensive scheme, or was something going on with Trey early in the game?

I think the scheme that Duke was showing might have something to do with that. Smith is very athletic and plays well in space. Maybe that was a factor. However, I didn’t notice Smith playing that much more, but will take your word for that. Last week Lamar didn’t play due to an ankle injury, maybe he wasn’t 100 percent the previous week.