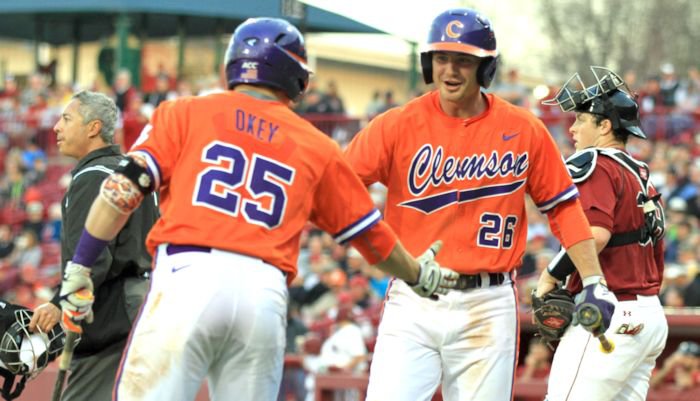 Why in the heck is Jack Leggett at Clemson baseball games and practices? I gave him the benefit of the doubt for the Maine series since it was his alma mater, but he was there again this week against Wofford. Is he gonna hang around all year? What the heck is his deal? Could this be a distraction for the current players and coaches?

This is a strange situation. On one hand, if he buys a ticket then he has every right to go to any game he wants. On the other hand, it feels strange for a guy that was fired just a few months ago to show up to practices and games and sit so close to the dugout and on-deck circle. I know Leggett loves baseball and obviously did a lot for the program at Clemson. However, coaches that are fired usually stay away, at least at first. I have heard from a few former players that say it's weird, but they are not surprised Leggett is doing this. It appears he is having a hard time with this. I don't know his plans for the season and how long he will come around. I also am not sure if this is a distraction. So far the team is on a six-game winning streak, so it doesn't appear to be hindering the performance.

I am excited about the offense next season. I think we can have a historic offensive season. What is the biggest concern on defense next season? Corner? Safety? Defensive end? I always enjoy the show and blog.

Thanks for the kind words. Like you, I am very excited about the potential of this offense. They will have so many options at their disposal. Defensively, I think the pass rush is the biggest concern. They lose two potential first rounders and potentially a third first rounder in the last two seasons. I do like the idea of Christian Wilkins at defensive end in early downs, but Bryant, Ferrell, Yeargin, Register, Kelly and others will be counted on in pass rushing situations. The good news is Brent Venables has a great group of tackles that can provide the inside pressure, and he is not scared to send extra attackers to create a pass rush.

At corner, Tankersley coming back was huge. I think Baker or Fields could be OK at the other corner. At safety, Johnson, Smith, Carter, Muse and maybe some newcomers will be OK. Let's not forget that the safeties last season struggled as the season progressed, so it's not like they have to replace Ronnie Lott and Troy Polamalu.

Give me a quick prediction for the weekend baseball series. Go Tigers! Sweep the dirt peckers!

I think this will be a very competitive series. I don't see either team sweeping the other, but I think Clemson can surprise the college baseball world and take two of three this weekend.