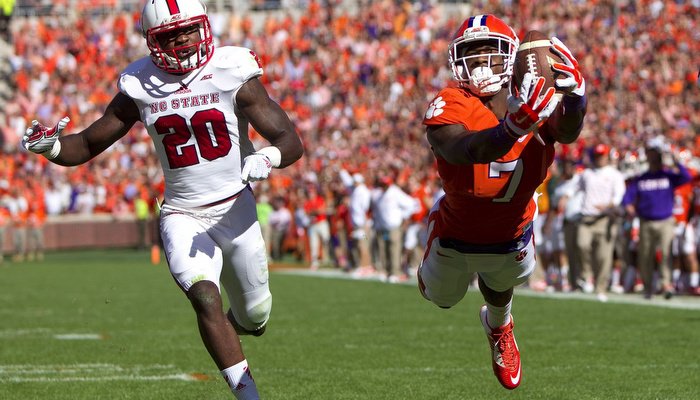 I believe this team has what it takes to be special.  The game against FSU tells me that we can go up against top talent and top coaching and win.  It was unfortunate the mistakes we made in that game.  Last week it showed what this team can do against lesser talent.   That game was special, playing near flawless football in all three phases.

However, I am concerned about this week.

Charlie Strong is an outstanding coach and built an outstanding program at Louisville.  Bobby Petrino inherits that foundation and talent.  We know a lot about Petrino’ s past but if there is one thing we should remember as football fans it is this: Bobby Petrino is a darn good college football coach.  He knows how to win.  Now he has a “stocked cupboard” to work with, which I don’t think has as always the case with his previous college teams.

Looking at only the game scores and what my assumptions are about other teams this early in the season, I believe it is fair to say we don’t quite know what to expect from this Louisville team.  Yes, their defense has been impressive so far against inferior offenses.  Isn’t that how good defenses are supposed to look against inferior offenses? Their defense is probably not #1, but it probably is in the top 20.  They could take advantage of our offensive line has a lot of injuries.   Their offense appears average, but it has to take a step up when they return their #1 QB and #1 WR.  Not to mention that Petrino is supposed to be an “offensive guru” and they do have a DC that has had success in the SEC.

I believe Petrino knew exactly what he was saying when comparing the fan atmosphere at Clemson with that other school up north.  He knew that it would rile up the CU fan base and focus our attention on our environment, not Louisville which is a mistake.  You and I both know that any team can win in given Saturday against any given opponent, especially if one team overlooks another.

From the interviews that have been posted, it doesn’t sound like the coaches or players are overlooking this game which is good, but it certainly feels like our fans base is.  Do you think that the way a team prepares can take on the perception of a fan base?  If so, do you believe that our coaching staff has kept the team humble and grounded enough to not make that mistake?

I agree with your assessments on Louisville. It is hard to tell exactly what they have because of their schedule, but I think their defense will be as good as Georgia's or FSU's. This might be the best defense the Tigers face this year. Louisville has a culture of winning. They have won 28 of their last 32 games and Petrino is one of the best offensive minds in the country.

Clemson's staff has done a good job of preparing this team each week in my opinion. It helps to have so many seniors on defense, but this program now plays to a standard each week no matter the opponent. One change this week is the environment. I think we will see a great environment for the first time this season. It won't be like game here versus FSU, Georgia or South Carolina, but it will be the loudest it has been all year. Personally, I think the players feed of of this.

I don't think this team is overconfident or lacks confidence. I think the seniors on this team have done a good job of keeping an even flow. I do think Deshaun Watson

Thank you for responding to my email and answering my question. If you are impressed with the future football facilities, then I am sure that I am going to be impressed. Can't wait to see what they have planned.

Now please do Clemson football a big favor and help us to stop this stupid "Silent Out" that some fans are pushing for Saturday's game. We have a great momentum going. We shouldn't change anything that is Clemson. The team needs to hear the roar of the fans. One fan mentions a crazy idea, and some jump on it without any thought of the impact and the chemistry the is created by the noise from the fans. They should not mess with what helps to make Clemson Memorial Stadium "Death Valley"!

I don't think the silent thing will work and even if it did I doubt it would be a huge factor. I have never seen a game won or lost in the pre-game warm ups. However, I do think it will be very loud when the Tigers come down the Hill and throughout the game. Petrino and Lorenzo Mauldin did us a big favor.

I have to admit I am really worried about our offensive line. I am hoping that Louisville's defensive numbers have been accumulated against some less-than-stellar opponents. Otherwise, we might have some trouble moving the ball against them with such a depleted offensive line.

The offensive line is not a strength and now depth is a big concern. Hopefully the guys can stay healthy and this game will not come down to injuries and inexperience along the offensive line. Louisville is big and physical in its defensive line and linebackers. They like to pressure off of the edge, so the line will have to pick up the blitz packages and play well. I also think it is very important to find production in the running game again this week. Last week was the first sign of a good running game and that will be needed again this week.