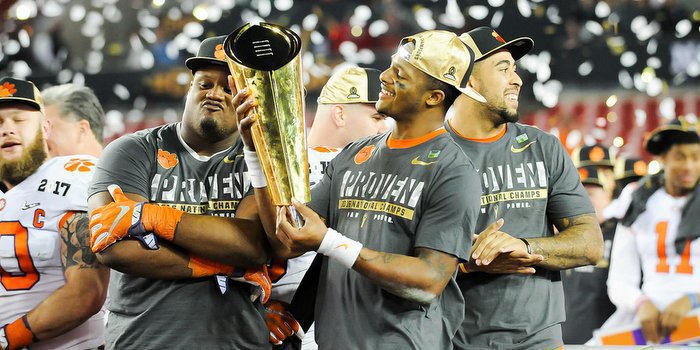 I have been watching Clemson football since 1974 and love the history of this program. Over the next few weeks I am ranking the top players I have seen at each position. Today, lets start with quarterbacks.

This one was easy. If you only watched two games, just watch the two national title contests where Watson ripped up Alabama’s defense. Watson is third in school history in completions (814), attempts (1,207), second in career yards (10,168), and second in touchdown passes (90). No one played better in bigger games than Watson who led the Tigers to two ACC titles, two national title game appearances, and a national championship.

Fuller played in a different time with a different offense, but he is the second best quarterback in Clemson in the last 40 years. He took over a losing program and helped turn it into a national power. He finished sixth in Heisman voting as a senior. Fuller is ninth in career passing yards (4,359), 11th in completions (287) and 11th in touchdown passes (22).

No one completed more passes (901) for more yards (11,904) and more touchdowns (107) in Clemson history than Boyd. He led Clemson to an ACC title and some of the biggest wins in Tiger history.

Dantzler is the only Clemson quarterback to rank in the top ten in career rushing (2763). He was the first player in NCAA history to rush for over 1,000 yards and pass for over 2,000 yards in a single season.

Whitehurst had broken every passing record at Clemson when he left Tigertown. In 2003 he passed for 3,561 yards which was another school record at the time. He also gets credit for going 4-0 against the arch rival.

Jordan eventually beat out several other quarterbacks and led the Tigers to a national title as a junior. Like Fuller, his stats don’t tell the entire story. Jordan helped the Tigers to wins over three top ten teams on the way to the national championship.

Stats didn’t matter to Williams, but wins did and when his career ended no one had more wins in school history. He still ranked in the top ten in school history in passing yards (4,547), attempts (717), and completions (333).

Toughness defined Streeter. Few quarterbacks showcased his ability to comeback from injury. Despite the injuries, Streeter is 12th in career passing yards (3,504), 11th in attempts (519), tenth in completions (294) and 14th in touchdown passes (17).

Harper had a huge junior season that helped him to this ranking. His 27 touchdown passes as a junior set the school record.