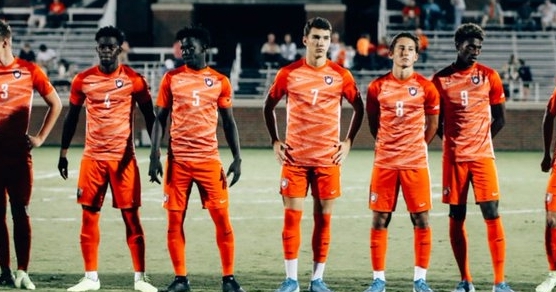 CLEMSON - The No. 3 Clemson men’s soccer team dominated Senior Night to top the Boston College Eagles, 3-1, at Historic Riggs Field Friday. They improved to 13-1-1 on the season.

This is the first season since 2015 Clemson has gone undefeated at home, finishing 9-0-1.

Clemson head coach Mike Noonan complimented the fans saying, “It’s the atmosphere the guys want to play in front of because it’s the extra energy. When you’re dying at the end of the game and need that run, it’s playing at home that makes it extra special.”

After a competitive start, Robbie Robinson scored the first goal of the match in the 31 st minute. Robinson intercepted a Boston College pass and slid the ball passed the keeper for an unassisted goal.

To begin the second half Tanner Dieterich scored from inside the box off a pass from Phillip Mayaka. James Brighton netted the third and final goal for the Tigers in the 66 th minute. The assist came from a nice play by Grayson Barber, beating a defender on the sideline then slotting the ball into Brighton for the score. Boston College converted a penalty kick after a hand ball in the box in 77 th minute, but the Tigers held on to win.

The game-winning goal was scored fittingly by the third-year captain and senior, Dieterich. The goal was his third of the year. He was met by his teammates on the sideline to celebrate the score.

“You can’t write a script much better,” coach Noonan said.

Seven seniors, Tanner Dieterich, Malick Mbaye, Nate Hall, Adrian Nunez, Nolan Lennon, Cale Thorne, and Sindri Bjornsson, were celebrated at midfield before the game. The group has led the Tigers to a successful season after winning only 6 games a year ago. Through what has been considered shared leadership, every single senior played an important role for this team.

“It’s a special night definitely for anyone involved. In the locker room, everyone knew tonight was for the seniors,” Dieterich said. “This is a special senior class. You look at the camaraderie between these guys and how close we are as a class, I think it’s all coming to fruition this season.”

The Tigers will be back in action against the NC State Wolfpack Friday, November 1st in Raleigh.

James Brighton put the ?? on top of last night's match with this score to give #ClemsonUnited a 3-1 lead! pic.twitter.com/kioxqKcSFH

#ClemsonUnited triumphs over the Boston College Eagles by a 3-1 margin, finishing their slate of home matches at Historic Riggs Field undefeated!