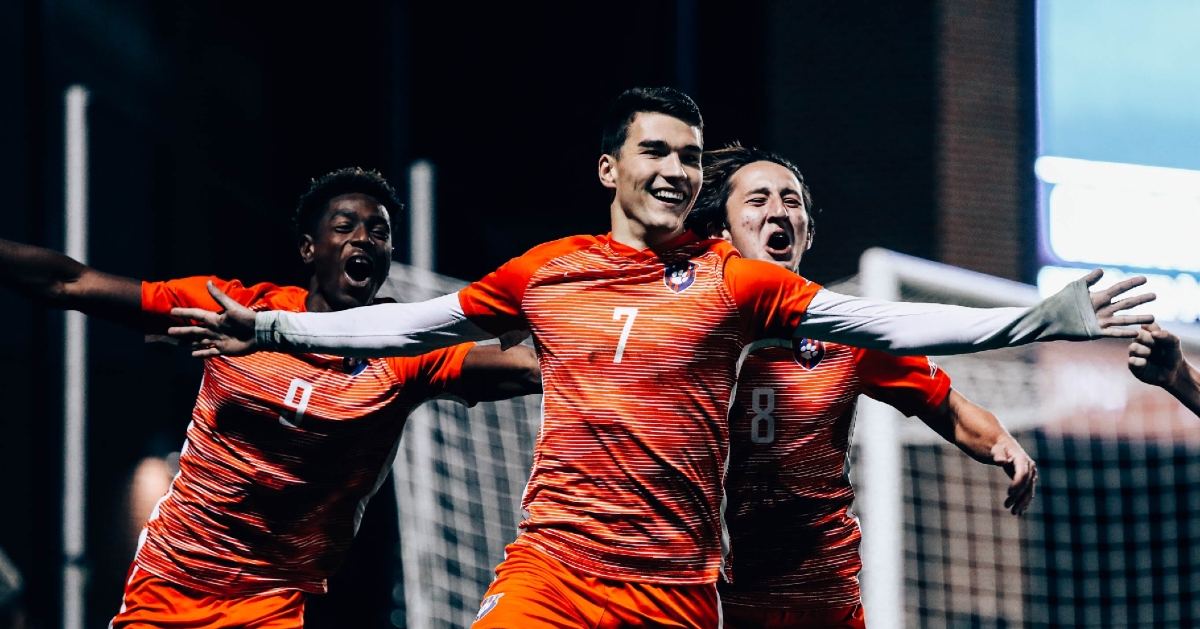 Clemson pulled out a second-straight overtime win after a second round OT victory over Charlotte. (Photo courtesy Clemson Athletics/Melina Alberti)

CLEMSON -- Nailbiters haven’t been a fixture of the second-seeded Clemson men’s soccer team's season, but head coach Mike Noonan is finding his group can handle them just fine on its path to the College Cup.

The nation’s highest-scoring attack had a two goals or more margin in 15 of its 17 wins coming in, but for a second-straight NCAA Tournament game, Clemson (18-2-1) came out on top with an overtime golden goal -- this time off the foot of leading scorer Robbie Robinson on a penalty kick in double overtime to top Providence (16-7), 2-1, on Sunday.

“I guess that’s what we can call surviving and advancing,” Noonan said. “They gave us all we could handle tonight, but once again, the better team won.”

Clemson will host Stanford at 6 p.m. on Friday at Riggs Field, a rematch of the 2015 College Cup final (a 4-0 Cardinal win).

The first overtime featured plenty of action in the box but nothing put on goal -- Providence midfielder Tiago Medonca’s header just over the bar being the closest to a winner.

The second overtime appeared to tilt Providence’s way with a second yellow card earning a red for Clemson captain Tanner Dieterich (for unsportsmanlike behavior his head coach said he was told postgame) with over seven minutes left in the period. But down Dieterich, Clemson’s attack pushed until the Friars’ Paulo Lima drew a yellow card for a hard tackle in the box on Kimarni Smith to send Robinson to the penalty spot.

Robinson coolly sent his try right down the middle for his second goal of the night, an 18th of the season (tying the nation's lead going into the weekend) and the gamewinner.

“I just stepped up there and had confidence in myself because we’ve been practicing them every day in training,” Robinson said. “Didn’t really think much about it. Went up and took it and I’m happy that it went in.”

Clemson defender Malick Mbaye says they were ready for the challenge when Dieterich went off.

“We just had the belief that we were going to win the game,” he said.

Clemson jumped on top early thanks to Robinson weaving his way among Providence defenders from near midfield into the box and tucking a shot in to the left of the goalkeeper in the ninth minute.

Providence provided some early pressure despite Clemson striking first, logging four shots and two on goal in the first 15 minutes. Clemson gained control toward the end of the period but the Friars caught them on the counter from a Tigers corner, as Medonca fought off Clemson defenders and sent the ball past Clemson keeper George Marks while falling down.

It was a third-straight game that the offensive-minded Tigers had their first goal equalized before they could add on to the lead.

The end-to-end action continued in the second period, where each side had its chances to pull a gamewinner -- Providence having the best shot on a Danny Griffin powerful attempt that Marks got a piece of and sent over the bar in the 84th minute.

Clemson and Providence were even at 11 shots after 90 minutes. The Tigers finished with a 16-13 shot advantage with five of the eight corners.

“It comes down to belief," Noonan said. "In sport, a lot of times the margins are down to whether you believe each other. We definitely have reason to believe in each other and I think that’s the separator … That bond of belief has gotten stronger and stronger and two overtime games is just going to make that even stronger.”

The Tigers' 18 wins are the most for the program since 2001 (also 18). Clemson has reached the NCAA's Elite 8 round three of the last five seasons now.

The Tigers improved to 13-0-1 at home on the season, which featured nearly 1,500 raucous fans Sunday evening (1,469), and sit one more home win away from the College Cup.

“That was one of the goals we put down that we wanted to go undefeated at Riggs and we’re sticking to that goal,” Mbaye said.