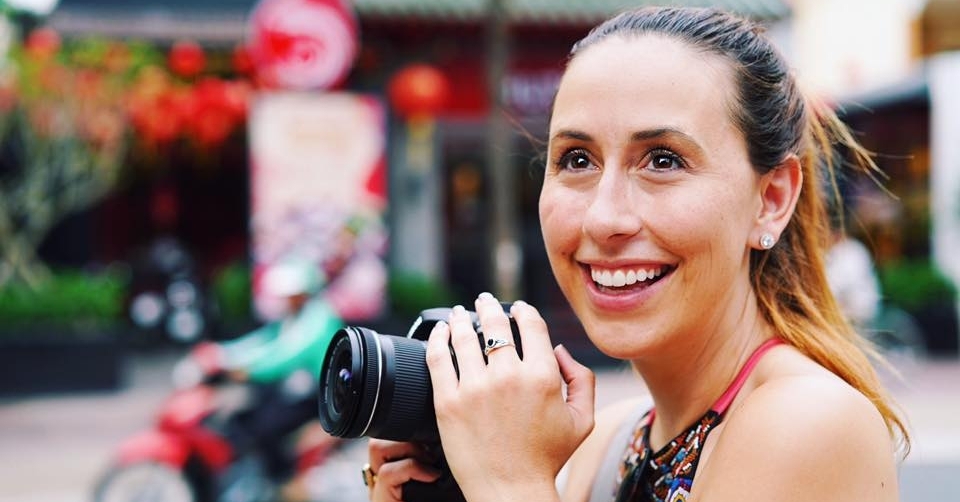 One of our own has the coronavirus and she’s going on the record.

Valerie Wilson is a 2013 graduate of Clemson University who lives in Los Angeles. A native of Saratoga Springs, New York, she was supposed to graduate in 2009 but a battle with Lyme disease took away almost four years of her life. She rebounded and, understanding that she needed to live every day like it’s her last, she followed her dream of becoming a travel writer/blogger/photographer.

She started Trusted Travel Girl and a career was born (you need to follow her on Twitter, Facebook, and Instagram). She will wake up in some strange part of the world with a text from me telling her how much I hate her and am jealous that the day before she /played with baby elephants/hiked The Alps/participated in Oktoberfest in Germany/or took pictures in front of the Eiffel Tower.

(An interesting note on Valerie: before the National Championship Game in Tampa against Alabama, she called me and asked if she should spend the money on airfare and a hotel and tickets to the game. I told her yes, and she and a friend flew into Tampa the day of the game. A few hours before kickoff I got a text from her saying that she didn’t think she would make it in because tickets were simply too expensive. Twenty minutes later I get a picture from her and she’s sitting on the 50-yard line. How?

She was looking for tickets and was in a crowd of people when a security guard pushed her and a few others into a line – she went through a gate and was screened for weapons and the next thing she knew she was in the stadium. Not one person asked for a ticket, and they found a few open seats and watched from some of the best seats in the house.)

When Clemson made the NCAA Tournament a few years ago and played the first round in San Diego, I asked to her bring her camera down from Los Angeles and shoot for us. For two days I had the best tour guide Southern California has to offer, even though I was afraid a seal was going to bite her.

However, Valerie has stayed in the country since a trip to Paris over the new year and watched the coronavirus spread from afar. That didn’t stop her - a known germaphobe and clean freak - from contracting the virus, and she allowed me to ask her about her situation.

Prior to contracting COVID-19, Wilson had been taking all of the advised precautions. She wore latex gloves while she was out grocery shopping, she washed her hands every few minutes, and took hand sanitizer everywhere she went.

On March 8, Wilson started to come down with the sniffles and ran a lowgrade fever that lasted about an hour. It wasn’t long, however, before she said she felt like was disconnected from reality, almost short-circuiting. She made an appointment with cardiologist but that visit showed nothing out of the ordinary.

A day later she developed a cough, but after the doctor listened to her lungs, he determined she didn’t merit a COVID-19 test. She then started to lose her sense of taste and smell, and Friday the 13th she went back to the doctor and they then administered the COVID-19 test. Three days later it was confirmed she had contracted the virus, and she now sits at home, not daring to go out, not earning income, waiting to get better.

Question: What was it like watching all of these events unfold in places you’ve visited?

Valerie: It's really surreal to be honest. Because I am watching airports start to empty out, like Hong Kong. I was watching on social media from people that were there. For a long time, people were saying, 'Don't go to Asia, it's not safe.' I go to Asia all the time, and I was like, 'How can I not go to some of my favorite places like Japan and Thailand and Indonesia' and all kinds of different places. The Philippines. Places that we were locking ourselves out of. But I thought it was necessary because I've said from the beginning that this would crawl through the entire population. I just didn't see how we could stop it fast enough.

V: There are more cases every day. I have stopped watching the news because it's not good for my mental state and I want to stay positive and get better. But a lot of people are still out there running around and doing their thing and going to work. I think that has started to change in the last week, but last week it was business as normal.

When did you first think you might have the virus?

How long have you been quarantined?

V: I didn’t really leave my house before I knew, but I’ve been here since last Friday. But, except for going to the doctor, I’ve been in my house since the 7th. I think I took a trip to the grocery store and that was about it.

What would be your message to Clemson Nation about this?

V: It's really important that everyone takes this seriously and stay the heck home if you can. I know that it feels like Clemson is sheltered and protected from something like this. When you don't live in a big city you feel immune to some of those big-city issues, but this is a global problem that affects every tiny town and every big city across our planet. We truly have to work together, from Clemson to South Carolina to the United States to the whole world, we have to be united on this front. It's the only way we are going to fight it and stabilize. Maybe if you're a Clemson student and you're young -- you think you are immune to the symptoms, but you have to realize you can be a carrier and you go to school with people with compromised immune systems and you are spreading it through the community when you're infected and we have to take it upon ourselves to be responsible and fight this. The faster we do that and get this locked down then the faster we can get back to school and football and traveling and whatever it is we love.