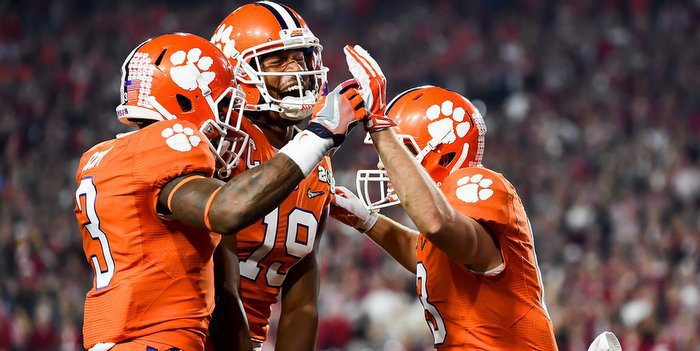 Artavis Scott and Mike Williams will be together again in 2016

CLEMSON – Clemson has a history of churning out great receivers, but it’s been taken to another level over the past several seasons with guys like Nuk Hopkins and Sammy Watkins. The scary part for opponents is that the run on great players at that position doesn’t appear to be stopping anytime soon.

The Tigers will lose Charone Peake from last year’s team but get back Mike Williams, who missed almost all of last season with an injury. R Artavis Scott, Deon Cain, Hunter Renfrow, Trevion Thompson, Ray-Ray McCloud, and Shadell Bell all bring experience back this spring and the coaches will add signees Cornell Powell, T.J. Chase and Diondre Overton this summer.

“Absolutely. The one advantage that I had growing up was my dad always told me to be sure you were recruiting great players at your position. We've been very fortunate to have some high-quality players and whenever they come and have success it helps recruiting that next group because they see the success that they have,” Scott told TigerNet. “I give our guys a lot of credit. I think our guys in our wide receiver room take a lot of pride in the success and accomplishments that the wide receivers before them have had at Clemson. I tell them, it's not your job to maintain that, it's your job to improve on that.

“That's really what they are trying to do every day. We get text messages from those former guys all of the time. They're texting me, texting the other wide outs, asking how they're doing and encouraging the guys. I feel very blessed to have a great group - and to be honest not just great players, but also high character guys that are fun to go work with. Sometimes the wide-receiver position can be a position with a lot of primadonnas and we've been very fortunate to have hungry, humble, hardworking guys at that position. That's what we look for in the recruiting process.” 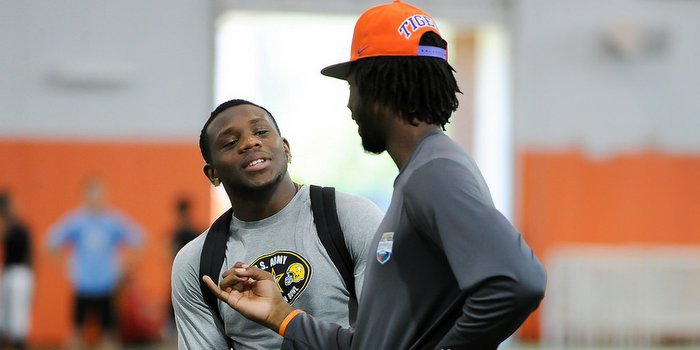 Artavis Scott and Mike Williams will be together again in 2016 "

A healthy Williams makes the offense even more dangerous.

“It makes a big difference. He's done a really good job in six practices,” Scott said. “He's a big force over there on the boundary. He makes a lot of plays and is a long and tough guy to cover. He adds another element over there for us on offense. I think that the fact that Deshaun and Wayne and those running backs - the success we had last year running the ball - is hopefully going to cause some problems for the defense once Mike gets out there.

“They are going to have to make decisions - are you going to stay in one high (safety over the top) and let him do 1-on-1 with the corner or are they going to stay two high and give us really good numbers to run the ball. I've been really pleased with Mike's attitude and his work ethic. I haven't seen a whole lot of rust out of him, but I'm really pleased where he is mentally and physically and he has a chance to me a dynamic player in this offense and have a huge impact for us this year.”

Williams isn’t allowed to participate in contact drills or be tackled, but he’s still going full-speed during all of the workouts.

“I think more than anything our message is, when you're out there, you have to go full speed and then let us control the time when you're out there and when you're not,” Scott said. “There will be certain times in live where we may pull him out and let him watch a little bit, but he is really doing about 95% of everything we're doing. “