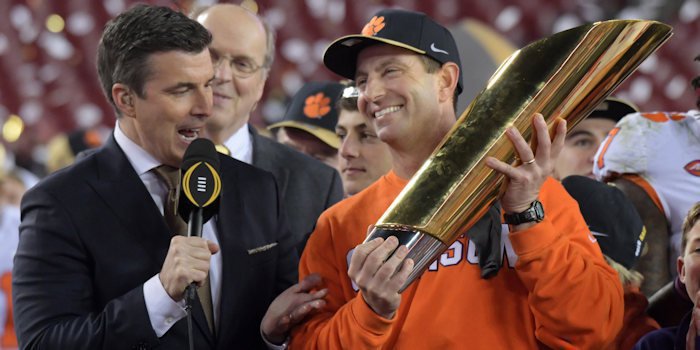 Clemson improved from fourth to second in the latest College Football Playoff Poll released Tuesday evening. The Tigers have a 9-1 record this season, including a 31-14 win over Florida State last Saturday that clinched the ACC Atlantic Division championship.

“Earlier today, we completed our third ranking of the season. We began by spending considerable time weighing teams 1 through 5. Alabama is the No. 1 team in the nation. Clemson's season-long body of work, including a win over Auburn and road wins against two other ranked teams earned the Tigers the No. 2 ranking,” College Football Playoff committee chair Kirby Hocutt said. “The committee has been impressed with Miami's wins against Virginia Tech and Notre Dame and ranked them No. 3. Oklahoma with its win against highly ranked TCU is No. 4, and Wisconsin after beating Iowa is ranked No. 5.”

Oklahoma and Miami each have impressive wins over the last few weeks, and many thought that either the Hurricanes or Sooners – or both - would jump Clemson in the standings.

“That's a fair statement,” he said. “The Selection Committee continues to factor in the injury to the quarterback in the Clemson game and the fact that he returned their next game and returned at full speed. That continues to be a factor in our discussions of Clemson. With Clemson, we continue to look at their total resumé and their six wins against teams with a winning record is more than any other team in the top 25 this week. They have two top-25 wins. I think they've been impressive to the Selection Committee not only at home but on the road with two road wins at Virginia Tech and North Carolina State. The Selection Committee continues to be impressed with how they're playing on the defensive side of the ball.

“We're aware of things that transpire in particular games. Their quarterback came into that game against Syracuse hobbled, looked like he was playing with an injured ankle. He was not 100 percent to begin with, and then when he was concussed in the second quarter, he missed the remaining part of that second quarter and the second half. He came back, they had a bye week, he came back two weeks later and appeared healthy and is back at full strength.”

Hocutt then said that Clemson and Miami are close in the minds of the committee – the teams meet in the ACC Championship on Dec. 2 in Charlotte.

Clemson has regular season games remaining against The Citadel (November 18) and at South Carolina (November 25), before meeting No 3 Miami (FL) in the ACC Championship game in Charlotte on December 2.

Clemson has three road wins over teams ranked in the top 20 of the AP poll entering the game, also more than any other team in the nation. The Tigers also have a 14-6 victory over No. 6 Auburn.

A look to the poll shows that Clemson has won its most recent game against six of the other nine teams in the latest top 10 of the College Football Playoff Rankings. Clemson defeated Alabama and Ohio State in 2016, downed Auburn in 2016 and 2017, and downed Notre Dame, Miami (FL) and Oklahoma in 2015. Clemson defeated Miami (FL) in Miami in 2015, 58-0.