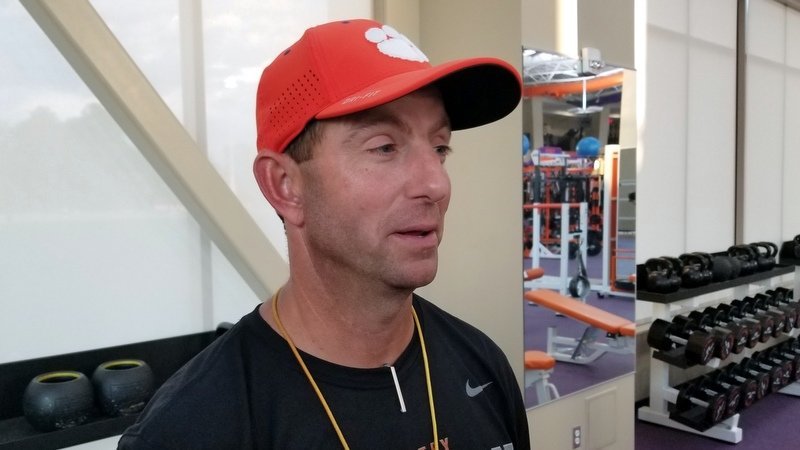 CLEMSON – Winning in Atlanta has never been easy for the Clemson football program, but head coach Dabo Swinney says it isn’t Bobby Dodd Stadium or rowdy environments that have cost the Tigers time after time. It’s been too many costly mistakes.

Third-ranked Clemson travels to Atlanta to take on Georgia Tech Saturday at 3:30 p.m. (ABC). The Tigers are 13-44-2 all-time against the Jackets in Atlanta.

The home team has won eight of the last nine games in the series, with the only road win taking place in

2016 when Clemson won, 26-7 in Atlanta during Clemson's national championship season. That was

Clemson’s first win in Atlanta over Tech since a 2003 victory in which current co-offensive coordinator Tony Elliott caught a touchdown pass for the Tigers. Clemson has not won consecutive games at Georgia

“I don’t really think it’s a difficult place to go in and play. I think we’ve had some games where we haven’t played well,” Swinney said. “When you throw pick-sixes and you give up boneheaded plays, you can get beat anywhere - Bobby Dodd, Death Valley, it doesn’t matter. We played up here twice a couple of years in a row. It’s a place you have to show up and be ready. It’s a great rivalry. Georgia Tech has beaten Clemson more than Clemson has beaten them over the years. Since I’ve been here, we’ve had some tough ones down there.”

“In 2005, a touchdown got called back because a tight end wasn’t on the field. 2007 (four missed field goals in 13-3 loss), I’ve tried to shut that one out of mind. 2009, it gets really vivid,” Swinney said. “They had the fake field goal. We had the holding call at the end after we hit Jacoby (Ford). It was crazy. They hit Demaryius Thomas and ended up hitting the field goal at the end. 2011, we had gotten off to an 8-0 start and we just spit the bit. We didn’t know how to handle that. We were way out of our league as far as we hadn’t ever been there just building the program and the culture and mindset and how to handle adversity when you are a favorite and things go against you. We didn’t do a very good job, so that was a disaster.

“We go down there in 2014 and Deshaun gets hurt. We weren’t quite ready to play. We were getting ready to go score and we had back-to-back pick sixes and that’s how you get beat. We’ve had some bad moments down there for sure. Our guys went down there and handled business a couple of years ago and a lot of those guys are still on the team. We’ve been a good road team and that’s a product of changing how we focus on things. For a long time, people buy into all of that mess, but you have to play well. The game doesn’t change based on where you are. It’s still the same game, same rules, same things win, same things lose. We’re just trying to be focused on not where we play or any of that, but just play well. Let’s grow and get better and play our best game this week. The only way that can happen is to have our best Thursday and our best Friday. Everybody take relentless pride in trying to be a winner and fight for every play that you get for it to be a plus. Then, if you have that mindset, you have a chance to be successful. You have to play four quarters and win more than you lose.”

“It’s still coming. Still young. Gotten a little bit of experience but it’s been a little harder early because of the style of play. This is our third option team and it’s a little different deal as opposed to some of our base stuff. Then the one game, we didn’t have a lot of opportunity to play a lot of people out at A&M. That was a different type of game. Mario (Goodrich) and Kyler (McMichael) are coming. LeAnthony (Williams) is getting a little bit better. I think we’re in good shape. We definitely need Kyler, Mario and LeAnthony to take another step here as we get into the second quarter of the season.”

“He’s done better. He practiced today and did pretty much everything today. He’s making really good progress. I think it’s possible (that he can play) but we’ll see. I think he’s close but we’ll wait and see.”

Swinney said quarterback Kelly Bryant has practiced with no limitations.