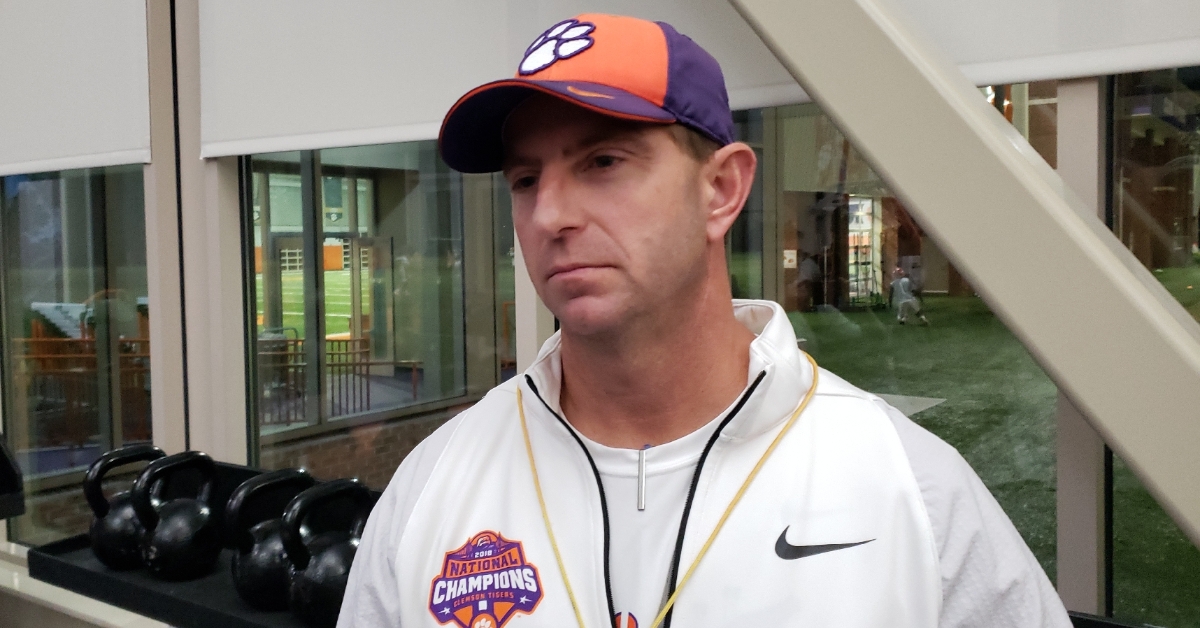 CLEMSON – The techno-strains of Sandstorm echoed over the Clemson practice fields Wednesday evening as an orange and purple sunset gave way to night. That means it’s rivalry week in Clemson.

The Tigers practiced for two hours Wednesday ahead of Saturday’s game at South Carolina (Noon, ESPN) with Sandstorm blaring from the speakers. Swinney said he was ready to get the game kicked off after a two-week break.

“We've had a great week and everybody is excited. It's been a long time, you know? Normally it's like a blur getting ready for this game, but with the extra time, it's like OK, everybody is ready to go,” Swinney said. “We are excited about Thanksgiving tomorrow and it won't be quite as rushed as it normally is. We will have more time, have a good Thursday practice, take some time to give thanks, spend some time with each other and then load up on Friday morning and head that way.”

As for Sandstorm – a song played repeatedly at Williams-Brice – Swinney said it used to get the players ready for the environment in Columbia.

"Instead of noise, you take what you know you're going to get. When I was at Alabama, we played Tennessee every year and of course that was Rocky Top,” Swinney said. “Rocky Top played 24/7 in the building and I know that song by heart because of it. It's been a good week. We've had noise all week to get ready. We know it will be a great environment and we will have to have great focus and poise to execute in that environment.”

As with any rivalry game, passions run high and Swinney his players have been told to keep their emotions in check.

“I am sure Coach Muschamp says the same thing to his guys. Nobody wants to have that nonsense,” Swinney said. “It is an emotional game with a lot of passion. A lof these guys know about each other and they know each other and things like that. But you just don't want to do anything to cross the line. We talk to our guys. If there is something, just walk away. We don't want foolish penalties and you don't want to be suspended.

“And more importantly, this is a great rivalry and both sides need to have respect for that. Play the game on the field and whoever the best team is that day wins. One team is happy and one team is sad and you move on and then come back and fight again next year.”

The team is eating a Thanksgiving meal together Wednesday night and will practice Thursday. A lot of players’ families will make it into town on Wednesday evening and spend time together as a family on Thursday. However, all players are accounted for when it comes to a Thursday meal.

“Nobody is by themselves on Thanksgiving,” Swinney said. “Everyone is accounted for. You have to go somewhere. You're either with your family, a coach's family, or a teammate's family."

The team will have a short meeting and walk-through Thursday.

"Tomorrow is a great day. It's always one of those fun practices because it's Thanksgiving. You're playing football on Thanksgiving,” he said.