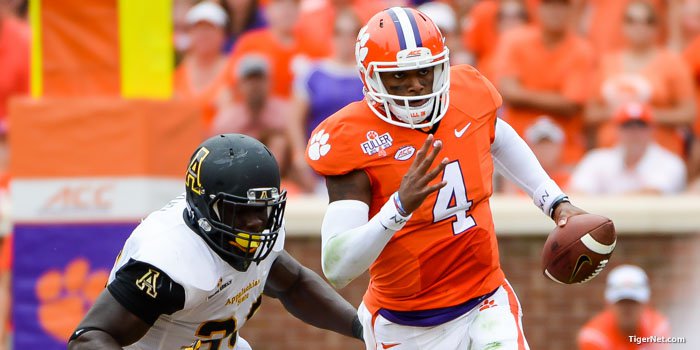 There were a couple of anxious moments for Deshaun Watson

Watson was intercepted on the first Clemson possession, and he had to leave the game for a play after a bad snap sailed over his head, leading to him to get hit hard by a Mountaineers defender in the scrum to get the ball.

Watson overcame the early sluggish play to lead Clemson to a 31-point half in a 41-10 win as the Tigers opened their season 2-0. Clemson steps up in competition for the third straight game as it opens ACC play Thursday night at Louisville.

“I just got the wind knocked out of me,” Watson said. “It was nothing grave or alarming, so I just sat out a play to gather myself before going back in.”

That seemed to settle Watson down as he passed for 248 yards and three touchdowns. Most of that came in the second quarter as Clemson scored 28 points and put the game away.

Watson finished 19-of-26 passing, and the Tigers’ offense got a spark when defensive lineman Carlos Watkins

“I thought we came out really slow and sloppy at times. There are some things we can fix in the film room, but we got momentum back when Carlos made that good play and carried that through the second quarter,” Watson said. “It’s nice to know when things aren’t going your way there is still a chance when your defense is still making plays.”

Peake had four catches for 86 yards, while Scott had six catches for 73 yards as eight different Tigers caught passes.

“He did a great job,” Watson said of Peake. “He’s a guy who has been around. He’s a vet. He’s been doing this through camp and practice for us, so there wasn’t a whole ton of pressure for him. He just needed to be himself and do what he knows how to do best, and that’s what he did.”

What the Tigers did best was use big plays to shake off their slow start. Clemson’s four offensive touchdowns were all 23 yards or longer.

Clemson’s 28 second-quarter points were the most by a Tigers team since Nov. 23, 2013 against The Citadel.

“That’s a very frustrating thing for a defense when you can strike like that,” Clemson head coach Dabo Swinney

That included Watson’s lengthy strike to Peake, the team’s longest score of the early season. Watson was excited about the play but said he can certainly throw one longer than that and added it wasn’t his best touchdown pass with the program.

He ranked it behind his touchdown pass to Peake against Georgia last year.

“Nah, it wasn’t maximum,” Watson said. “I mean, I didn’t really hitch into it. I just kind of planted and threw it. He made a great play and a great catch to come down with it.

“I don’t know. It might be second behind the Georgia one, being it was my first and all, but yeah, it’s one of my bests, I think.”