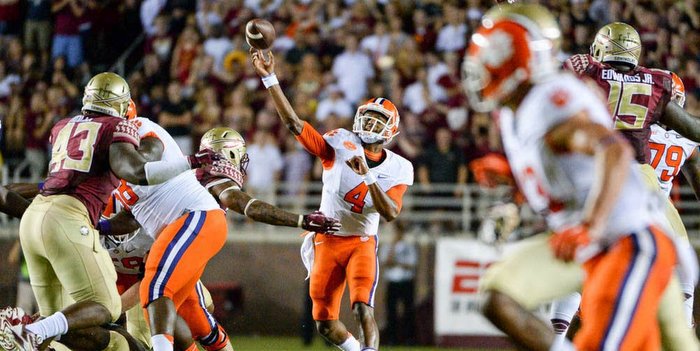 Watson throws during second half action at FSU in 2014

CLEMSON – The home crowd at Florida St. Saturday night will be loud and raucous, but Clemson quarterback Deshaun Watson isn’t worried about the noise, the music or the big stage. He knows that the players on the field win games, not the fans in the seats.

Third-ranked Clemson travels to No. 12 Florida St. Saturday, the place where Watson, then a freshman, burst onto the national scene as the 22nd-ranked Tigers fell short of beating the top-ranked Seminoles in overtime.

Watson took over for senior starter Cole Stoudt early in the contest, but his heroics weren’t enough as the Tigers failed to convert on 4th-and-short in overtime. Karlos Williams ran for a game-winning touchdown on the Seminoles’ ensuing series, and a chance to upset the defending national champs was lost.

Watson remembers how he felt walking off the field at Doak Campbell.

“Thinking we should have won,” Watson told the media Monday. “We had so many opportunities that we didn't capitalize on. We played very well and we just fell short. Walking off the field with the feeling that we should have won, but we didn't. It was a great learning lesson for the whole team, especially the young guys who got to play.”

Watson was 19-for-28 for 266 yards and added 30 yards on the ground in the loss, but he wasn’t surprised by his success against the champs, on the road, in his first extended action.

Both Clemson and Florida St. had open dates last week, and Watson said the team took that time to recuperate from the rigors of the season’s first seven games.

“My week was great. I had a good week of practice,” he said. “A lot of the guys got rest and got back healthy and rejuvenated for this week. We are all ready to get back to the normal routine and get back to our game week schedule and get ready to prepare and play on Saturday.”

With a week of rest in the books, Watson is looking forward to taking the field in Tallahassee, and while he knows the Seminole crowd will play its part, he knows the final result rests on the players.

“It's one of the top places to play. It's a hostile environment - the fans get into it and it's loud - but at the end of the day, it's still football,” Watson said. “The crowd and the stands don't win the game. They can influence the game, but they don't win the game. Players making plays on those opportunities that they get, that wins games.”

Last weekend’s slate of games was filled with upsets – including second-ranked Ohio St.’s loss at Penn St. – and Watson knows the Tigers have to be the better team Saturday night.

“We understand that in college football you have to perform every week. That's why people say each week is critical no matter who you're playing because anybody can be beat,” he said. “It's funny because each week it doesn't matter how good you've been the previous five weeks, you got to be good that week. This weekend showcased that. I guess that night Penn State was the better team. Last week when we played NC State, we were the better team because we came on top and took advantage of opportunities. It's really just the best team is going to win that day. That's the way college football is and any level of football. It's who is better that night and taking advantages of the opportunities to make plays.”