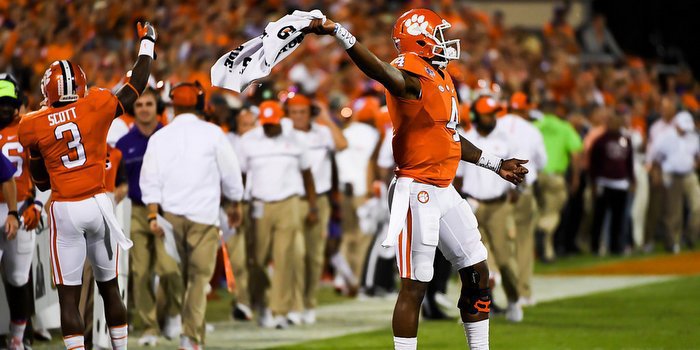 Swinney says Watson is the most complete player in the country

Last Saturday’s top five contest between Clemson and Louisville was billed as a marquee matchup of two of the nation’s best quarterbacks between Deshaun Watson and Lamar Jackson.

Neither quarterback disappointed, and while Jackson put on a Heisman-worthy performance in the second half, Clemson head coach Dabo Swinney says his quarterback is still the best player in the country.

Watson finished with five passing touchdowns, 306 yards through the air and another 91 on the ground. More importantly, he led his team back from an eight-point deficit in the final seven minutes, opening the way for another trip to the ACC Championship Game and a possible spot in the College Football Playoff.

Jackson started slow as the Cardinals scored just 10 first half points, but he finished with 295 passing yards, 162 rushing yards and three scores -- and a loss.

Monday morning, Swinney told the Tiki and Tierney Show on CBS Sports Radio that he thinks Jackson is a special player.

“Everything really went according to script that first half, especially in the second quarter. We just put all three phases together and we kept (Jackson) at bay. For us, we knew that we would be the best front he had seen,” Swinney said. “We felt like we could do a much better job of keeping him in the pocket a little bit.

“When we watched those previous few games that they played, I told our guys, ‘Hey, they made a lot of layups. There were some guys running wide open. We got to take the lay-ups away and we got to make him make some three-pointers with a hand in his face. This is a special guy here, and if you give him a bunch of lay-ups and let him get in rhythm, you’re in trouble.’”

Jackson led Louisville on a 26-0 run that was aided by Clemson turnovers.

“The turnovers really hurt us. We had two in the red zone that cost us points,” Swinney said. “Because of the turnovers and us scoring so fast, it really put our defense in a bind and they got tired. They got tired at the end of the game, but they continued to just give all they have. And listen, this guy is something special now. He is electric. He played with a tremendous amount of heart and toughness for his team.”

One could argue that either player is the nation’s best, but Swinney prefers Watson. Not because he sees him every day but because he thinks Watson is more than just a running back playing quarterback.

“He’s special. I promise you, he’s not trying to win the Heisman. Deshaun Watson just wants to win. His goal is to win, and that’s what he does,” Swinney said. “He’s lost two games ever here. One was at Georgia Tech his freshman year. He played about 12 snaps and he got hurt. And then the other one was the national championship game. The bottom statistic is does a quarterback win?

“And he is the ultimate winner, an incredible preparer, a grinder, is a super human being, great poise – that’s what you saw the other night. He could have easily gotten frustrated, but he just kept playing. When we had to have it, we had to go 85 yards to win the game. He took his team right down the field to win the game with a great touchdown pass to Leggett. That’s what great quarterbacks do. That’s what great leaders do. He’s special, man. I don’t think there’s a better player in the country. He is the most complete player in the country without a doubt.”