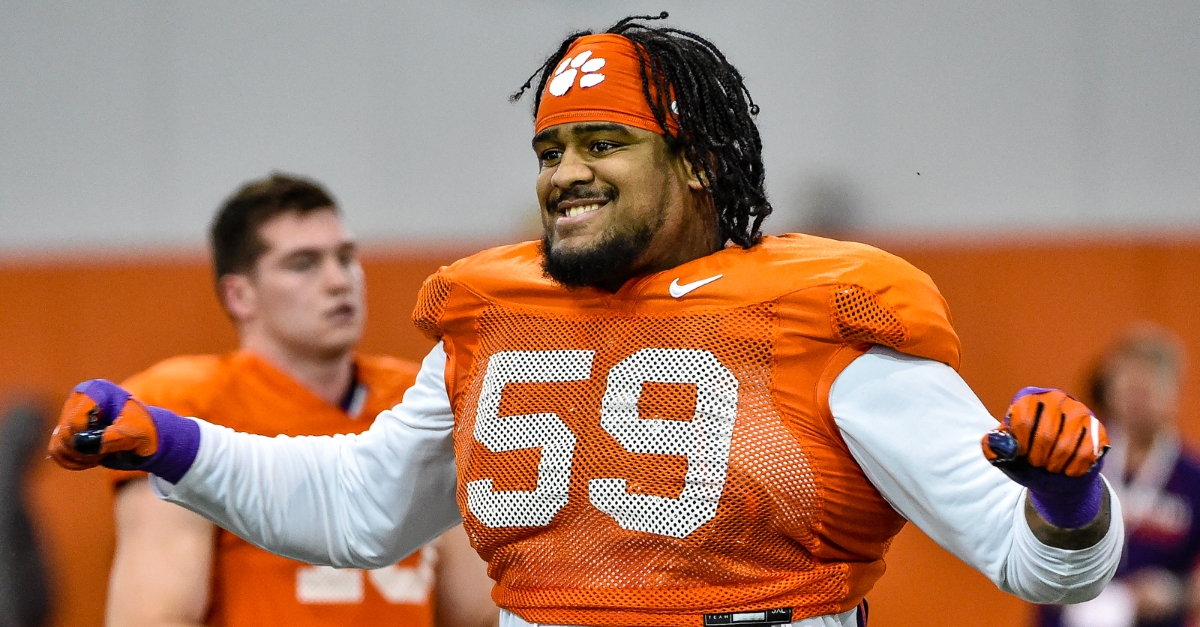 Williams stretches before a recent practice.

Everybody wants to know about the youngsters on the defensive line as spring practice nears the midway point, but one name that keeps popping up in interviews is an old one in Jordan Williams.

Williams missed last spring as he recovered from a surgery that inserted a screw into his leg. Williams played in all 15 games last season and was credited with 31 tackles (5.5 for loss), 2.5 sacks and two pass breakups in 297 snaps.

The healthy and veteran Williams is excited about the spring.

“I am practicing in the spring, so it feels good to be able to get down those technical things and opposed to getting in there and going non-stop like it is in (fall) camp, kind of,” Williams said. “But it is going pretty good. I am just focusing on the things I struggle with the most. I am just taking my time to get better each day and focusing on being better at something different.”

Williams said the good vibes extend to the entire team.

“It is a good feeling. Everybody wants to make each other great,” he said. “People are competing each and every day, but it is a good competitive edge everybody has. Nobody is out here trying to hurt anybody or anything like that. Everybody is trying to make each other better, so it has been a good spring so far. We have a couple of more days to get better, so it is very exciting.”

Limited to film study and watching from the sidelines last spring was a difficult necessity for a player who wanted nothing more than to be on the field. However, it was also a learning process and he thinks it will make him a better player.

“It is super important. Last year, I had to take on a different kind of role, more as a coach or a student of the game and had to watch more and look at it from a different angle,” Williams said. “Now, that I was able to look at those things and adjust to them last season, I have more knowledge this spring to focus on the little things that can help me be a better player.”

Williams was asked if the defensive line will be better this season, and he said he simply wants to improve from one day to the next.

“I can’t really say that right now. We are going to just keep working and trying to improve,” Williams said. “The thing that is different from last year is that we are all a year older, so we have guys that are stepping up that know they have to grow up and we are just a year older than last year. I don’t know if we are better than we were last year, but that is what we are working for and we want to keep improving.”

However, the mid-year enrollees have been fun to watch.

“They are very exciting to watch, especially Bryan (Bresee), Demonte (Capehart) and Myles (Murphy). They are explosive guys who are still learning things, but you can tell they are going to get it and when they do, it is going to be fun to see,” Williams said.