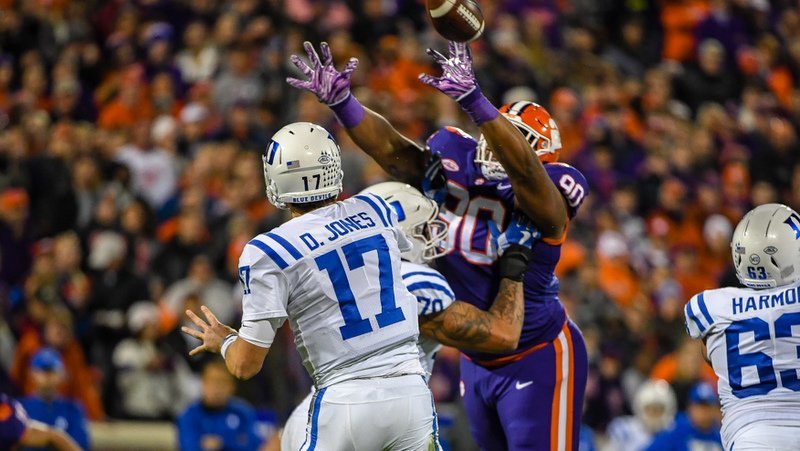 CLEMSON – The first-team Clemson defense hasn’t allowed a touchdown since the Syracuse game on September 29, but Brent Venables isn’t ready to anoint anyone or any unit the best.

Clemson’s defensive coordinator has coached elite units, including the nation’s top-ranked defense in 2014; however, Venables isn’t one for comparisons.

“I don't know. I'm a play-by-play, drive-by-drive, live and die every play good or bad with the guys. It's good,” Venables said after Saturday’s 35-6 win over Duke. “You don't want to take anything lightly or discredit our guys by any stretch but we have been in a pretty decent rhythm. We certainly haven't been perfect but we've been in a pretty good rhythm. I lose sight. I forget who we just played within 24 hours. It's dementia too, probably. It's pretty good.”

In the first quarter, Duke amassed 127 yards and scored six points, while only totaling 135 yards the rest of the way, and Venables took full responsibility for the Blue Devils quick start.

“Just some new stuff. It's not our guys' fault. I think our guys came ready to play,” Venables said. ‘That's on me - making adjustments, getting them to understand what they're doing. I thought our guys responded well. They just brought some new stuff. You get new stuff every week to a certain degree, but there is some big, serious structural things that have to take place - you're going to be out-leveraged, not have guys in the right spots. The success that they had on that was not our guys' fault. That's on me.”

Clemson’s defense tallied nine tackles for loss and four sacks in the contest, something Venables attributed to making Duke quarterback Daniel Jones hold the ball a little longer than he’s used to.

“I think our guys played pretty good up front. Nothing special. I think they had some design opportunities for them,” Venables said. “Sometimes the coverage was decent and he was holding the ball. We felt like going in if we could get lined up and be in the right position that we could make him hold the ball a little bit. I think it was a byproduct of a few of those things. He's big and athletic. He's just a big, long dude and a very talented guy. I don't know how many other opportunities there were, but up front, those guys played pretty good.”

“He had really practiced well. J.D. Davis had a little hamstring issue. We didn't know going into the game. I thought J.D. was going to go but it wouldn't loosen up on him. Shaq has been practicing really well. It's getting the opportunity. We have some depth there. Every week is a little different - not necessarily scheme but situationally what's going on, the flow of the game. I think you got a little glimpse of what Shaq's been doing. He's been doing work. He's always had an unbelievable attitude all along despite inside there's probably some frustration. Nothing is more fun than playing and being rewarded for your hard work. You're looking for those situations where you can reward guys. Shaq has really worked hard and deserved that opportunity. He played well tonight.”