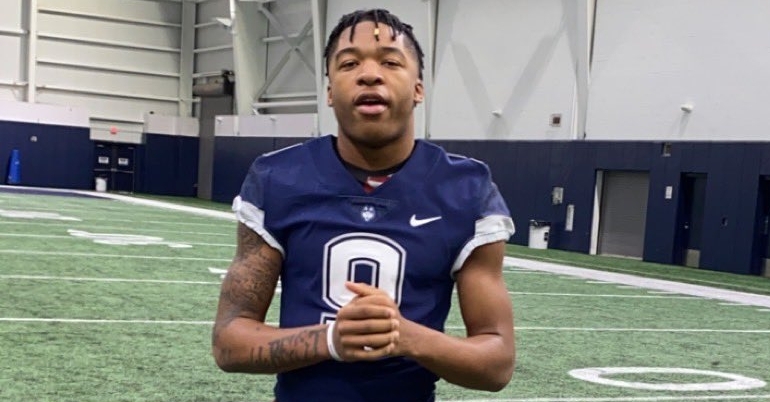 One of the nation’s top prospects in the 2022 class has been in talks with the Clemson coaching staff, and the coaches like what they see on both sides of the ball.

Mehki Flowers has collected major offers early on in his recruitment, including Penn State, Arizona State, Virginia Tech, Nebraska, and West Virginia. The 6-2, 193-pound athlete from Harrisburg (PA) Steelton-Highspire is regarded as one of the top wide receivers in the ’22 class, and Clemson has Flowers on the recruiting board for the offensive and defensive side of the ball. TigerNet spoke with Flowers about his recruitment to this point and where Clemson stands with the Pennsylvania playmaker.

Flowers has heard from Clemson wide receivers coach Tyler Grisham and defensive coordinator Brent Venables, and both coaches love what they see from Flowers’ film.

“They both love my game on the offensive and defensive side,” Flowers told TigerNet. “Coach Venables has me on his defensive board for that safety/hybrid position, and Coach Grisham called me weeks after him and told me he loved my offensive film so he put me on his wide receiver board for the ’22 class. They both love how physical I am and that I can play both sides on the field.”

Growing up in Pennsylvania, Flowers has always been a fan of Penn State. Clemson has also been a favorite of Flowers, and Coach Grisham and Coach Venables are making sure that Clemson stays in a good place with Flowers.

“They are very genuine,” Flowers said of Grisham and Venables. “Of course they’re going to talk football, but they talk about the program and how they set people up for life after football. Clemson has always caught my eye because they play as a family and that’s my favorite type of football. Growing up and it being my home team, I’ve been a Penn State fan. My other two favorites has always been Clemson and Alabama, but I think any recruit would tell you that.”

Flowers has mainly been recruited as a wide receiver, but many schools recognize his potential as a safety because of his instincts and athletic ability. What is Flowers’ preferred position? And what are the strengths of his game?

“Right now I like wide receiver, but I know as I grow over my junior and senior year I’ll fit more into the safety position,” Flowers said. “My strengths in my game is that I notice everything that’s happening on the field fast, so I react even faster. Nothing gets past me. And I think coaches notice that.”

Flowers hasn’t visited Clemson yet, but hopes to make the trip to campus very soon. Although it’s early in his recruitment, Flowers knows what he’s looking for in a school during his recruitment.

“A school that makes me feel at home when I visit,” he said. “Somewhere I can spend those 3-4 years of that chapter comfortably. I’m looking forward to scheduling a visit when this dead period ends. I want to learn more about the academic part of the program, so I’ll look into my major.”

Flowers models his game after some elite wide receivers, including a couple of former Clemson greats.

“I actually try to model my game like Tee Higgins,” Flowers said. “He’s one of the guys I look to as elite coming out of college. Also, Julio Jones and DeAndre Hopkins. They’re very physical wide receivers.”

As only a sophomore in high school, Flowers has garnered the attention of many top programs across the country. What has the recruiting process been like for Flowers so far? And what kind of a player will a school be getting at the end of Flowers’ recruitment?

“It’s been exciting,” he said. “A new college pops up every day and it’s moments like these that I’ve always dreamed of. And just knowing that I’m making my mom proud throughout the whole process makes me go 100 times harder. I will be all in, putting everything I have into the program every day and every minute. My class will make history at whatever school I go to, guaranteed.”

Flowers’ film shows that he’s a dynamic player at receiver and safety. Flowers high points the ball routinely and pulls away from defenders in the open field. At safety, Flowers shows the ability to come down and make tackles in one-on-one situations and puts himself in good positions to defend passes. Whether on offense or defense, Flowers plays physical and makes game-changing plays.

Flowers is currently rated as a 4-star by 247Sports in the 2022 rankings. Flowers is the No. 78 player in the country, coming in as the No. 11 wide receiver and the No. 3 player in Pennsylvania.