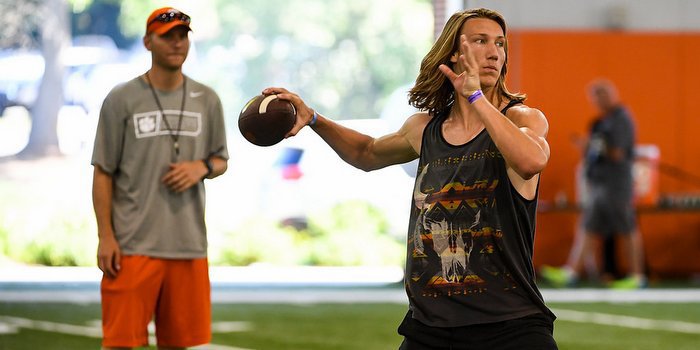 We were out shopping Thursday evening when I got a text that the nation’s number one player for the 2018 recruiting cycle had just committed to Clemson. Five-star quarterback Trevor Lawrence out of Cartersville (GA) gave his verbal to the Clemson coaches Thursday evening, and I called Lawrence’s father Jeremy to confirm.

“Yes sir, he committed a little while ago,” Jeremy Lawrence told TigerNet. “He doesn’t want to talk to anybody right now. He doesn’t want to do any interviews. Right now he wants to chill. He is excited and we are excited he’s made a decision.”

Per the request of Lawrence, none of the Cartersville coaches will comment on the commitment, even though one texted me back that “He’s the real deal.”

We did reach out to a few prospects to get their reaction, and I started with 2018 LB commit Mike Jones, Jr out of IMG. Jones told me he was excited to have another commit for the 2018 class and that he’s known Lawrence for a while.

“It's great, honestly. In eighth grade, I played against Trevor in an all-star game in a Georgia versus Tennessee All-Star game and I knew he was special even then,” Jones said. “He lit our team up and he threw all over us. We have been friends for a long time. I tried to recruit him to Tennessee at one point, but this is exciting because we are going to be together again. This is going to be crazy and we are going to take over. I am crazy hyped.”

Four-star 2017 wide receiver commit Amari Rodgers told me he was excited about the fact that the Tigers already have good quarterbacks on campus and will add Chase Brice, Hunter Johnson and now Lawrence into that mix.

“This is a dream for a wide receiver. You know it's going to be a hard competition but also you know that no matter who starts it's going to be a great quarterback,” Rodgers said. “I can trust them that they will be able to get all of the wide receivers the ball at any time. At the same time, I am happy and excited but it's hard because I am close to all three of them and whoever plays, plays. But it's exciting all around.”

“He puts the ball where you want it. He throws wide receivers open,” Rodgers said. “I threw with him in a couple of camps and he threw me open most of the time. On the comeback route, I wasn't open at first and he threw me open so that's what I love about him. He is so good fundamentally but he's also smart and a student of the game. He knows what he's doing.”

Another 5-star and 2018 prospect high on Clemson’s list is stud defensive lineman Xavier Thomas, who will soon join Jones at IMG. Thomas said earlier this week that he had narrowed his list to two schools – Clemson and South Carolina – and that Lawrence’s commitment has a bearing on which school he will choose.

“It has a big impact because everyone says Clemson is losing seniors and they won't be good for the next 4-5 years but if you look at the recruitment, it's crazy,” Thomas told TigerNet. “It is HUGE and it is has a serious impact on my decision! Trevor and I are good friends.”

Lawrence has led Cartersville to back-to-back 4A state titles; the team is only the 11th in Georgia history to put together consecutive 15-0 seasons.

Lawrence, who has been the starter since early in his freshman season, eclipsed 10,000 career yards this season and is 40-1 as a starter. He has thrown 118 career TDs and only 20 interceptions.

We watched Johnson and Lawrence on back-to-back days at Swinney’s high school camp last June, and talked to Cartersville head coach Joey King about his prize pupil after the visit.

“He's the best by far that I've coached. It's like I tell all of the recruiters and all of the interviewers that call, he's the real deal in every category,” Joey King said. “Not only is he a phenomenal talent with what God's given him but he's taken what God has given him and really busted his tail and worked at his craft day in and day out. He's an exceptional kid. He's a really, really good student. His leadership is growing every day and he's learning how to embrace that role. All around, he's everything you could ever want in a kid and a quarterback.”

What others are saying about the big announcement:

Trevor Lawrence showing a little bit of why he's the No. 1 player in next year's class. #Cartersville pic.twitter.com/0izapsIJ4e

We got all these top QB's coming in...I'm worried I may not get the playing time I deserve at my true position?? #Gunslinger

@Trevorlawrencee Welcome to the family bro!

Congrats lil homie Imma tell u like I told my QB @CBrice_2 who ever win the job you better not throw my way??????????#wecocky https://t.co/Vlrv4BoLTF