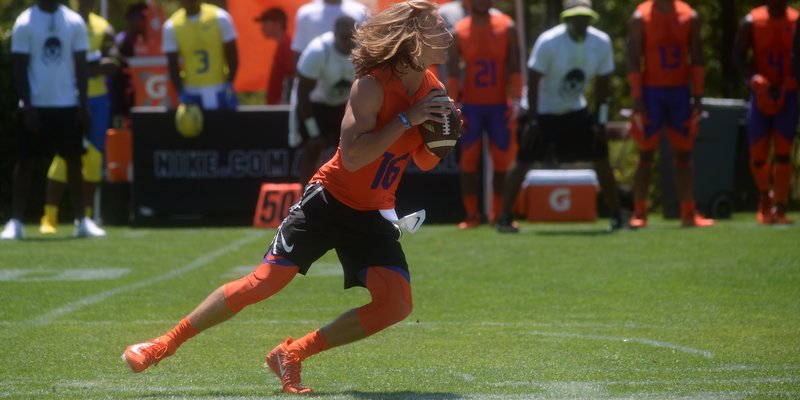 Saturday night’s primetime high school matchup between Bartram Trail (FL) and Cartersville (GA) will have a distinct Clemson flavor. The teams will kick off the season tonight at 7:30 p.m. on ESPN2.

Cartersville has won 31 straight games and scored 600 points in each of the last two seasons. The Hurricanes’ quarterback, Trevor Lawrence, is a Clemson commitment and is rated by many services as the top quarterback nationally for the 2018 recruiting cycle. On staff at Cartersville as a defensive backs coach is former Clemson player Kyle Tucker.

Bartram Trail is the high school home of former Clemson quarterback Kyle Parker, but the Bears have former Clemson defensive back Xavier Brewer on the coaching staff. Brewer is in his second season at Bartram Trail and is the co-defensive coordinator and manages the coverages.

Brewer told TigerNet he’s excited about the opportunity to face Lawrence and a hot Cartersville team.

“Most definitely, it’s going to be a great experience for our guys to play a game on national television and travel out of state and be treated like college football players,” Brewer said. “He's (Lawrence) everything he's hyped up to be and more.”

Brewer has been asking the Clemson coaches about Lawrence, and they compared him to a soon-to-be Hall of Famer.

“After the National Championship game (before I knew we were even playing him) I asked some of the staff about him,” Brewer said. “They mostly described him as a Peyton Manning that could run. I thought they were exaggerating until I saw him on film. He's probably the most polished quarterback I've seen in high school football, and you can tell he makes the players around him better.

“He's the core reason they are a national power and on a 31-game win streak. That's not to take away from other great players they have on their team because that running back can beat you, too, but it's clear on film who teams try to slow down (Lawrence), and no one has had any success up to date.”

Cartersville opened the season last week with a 35-14 victory over Allatoona. Lawrence threw for 220 yards and two touchdowns in the win and now has 10,831 passing yards and 122 passing touchdowns in his career.

The Bears have quarterback options of their own. Auburn commit Joey Gatewood shares snaps with Riley Smith.

“We have two great quarterbacks on our team, with one being Joey Gatewood who is committed to Auburn and is an exceptional player,” Brewer said. “But we have another guy, Riley Smith, who is also 6'5 and can make all the throws. He has some D1 offers but is being overlooked because this is his first year on varsity. Last year he split time with two other D1 quarterbacks.

“I think he's gonna make a name for himself Saturday night, and you'll see he has some similar qualities as Trevor, so we're thankful to have a couple of big-time guys we practice against every day to prepare us for what we will see Saturday night.”