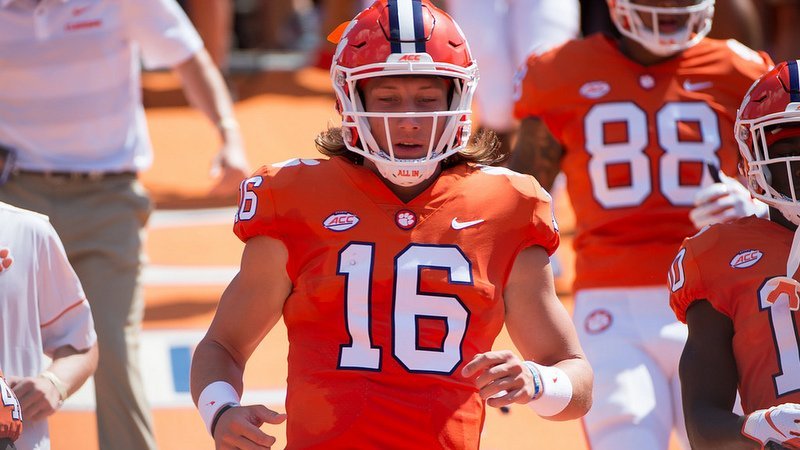 CLEMSON – While professors call him ‘William’ and fans and teammates have given him the nickname ‘Sunshine,’ there’s only one name Clemson’s freshman phenom will answer to.

Trevor – a name that has taken Clemson and college football by storm even before the tall, longhaired quarterback took his first snaps under center last Saturday.

As fans and the media get to know Lawrence and you see him out and about, in class or on the field, calling him ‘Trevor’ will do just fine.

"It (Sunshine) is ok. I used to have short hair back in the day, so it didn't really start until I started growing my hair out. But I've never really liked it,’ Lawrence told TigerNet Monday afternoon. “I just like being called Trevor. Every time I start school or have new classes I hear William, because Trevor is my middle name. So, I go into a new class and I hear, 'William Lawrence.' I am not used to that, so I have to tell everybody I am just Trevor. That's the name I like the best."

While being on a college campus with 20,000-plus students, being a member of a powerhouse football team and being interviewed by throngs of media members, Lawrence said his time at Cartersville high school and being such a highly rated recruit prepared him for what he was going to face at Clemson.

“There are definitely a lot more people. In high school, there would be a few after the games and I could kind of control it and just get out of there and do whatever I wanted to do,” Lawrence said. “Now, it's more structured, but it's been good, I think. Saturday, talking to the media no one was really pushy with questions, so it was pretty relaxed.”

However, he also realizes that with more exposure comes more responsibility.

“You always have to be aware of who you're around and where you're at,” he said. “If I'm not in the mood to really talk to people, I just can't go to public places really, so you just have to be careful where you go. Handling all of it in high school got me ready for it - just being from a small town and experiencing it on a much small scale.”

During Saturday’s 48-7 win over Furman, Lawrence completed 9-of-15 passes for 137 yards and three touchdowns, and while he considers that a good start, the former 5-star prospect is focused on what’s ahead.

“I haven't really looked at it too in depth yet. I've just been trying to focus on Texas A&M,” he said. “I thought I was pretty good overall. I missed some throws that I wish I could have back, but overall I thought my decision making was pretty good.”

Including a trip to Texas A&M to play in front a crowd of 100,000-plus in primetime.