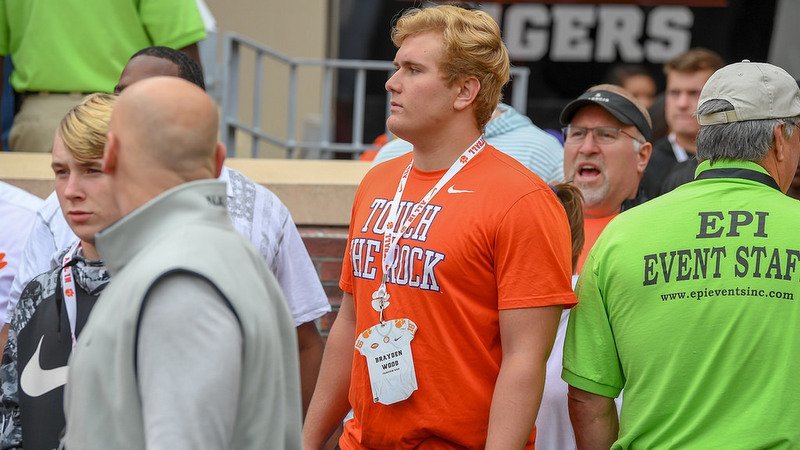 Wood visited Clemson for the Tigers' win over NC State

One of the top defensive end prospects in the state of Colorado and in the 2021 recruiting cycle visited Clemson recently and came away impressed with everything he saw.

Brayden Wood, a 6-3, 250-pound end out of Longmont (CO) Fairview used his Clemson connections to earn an invite to the Clemson campus and he hopes a return trip next spring nets a Clemson offer.

“My brother is a pitcher down at Furman in South Carolina and his roommate’s brother is Zach Alley, a Clemson assistant,” Wood told TigerNet. “When I first went to go see him, we saw Zach and hit it off. I said, ‘Hey, I play football’ and sent him my tape. And he’s toured us around, and the new facilities were partially done and I know most of the stuff was built - I think they were still working on most of the things leading up to my freshman year or midway through my eighth-grade year. We took another visit again during the spring of my freshman year - right as we just finished.

“Then I got to meet both defensive line coaches in coach (Todd) Bates and coach (Lemanksi) Hall and we hit it off. Then he asked if I wanted to go to camp that summer, which I did. I thought I did really well - was in a top group of offensive linemen that coach Bates had. Me and a couple others really hit it off. And they wanted me to come out to a game and luckily, I had a Thursday game that week. It was also perfect because my brother was having his annual White and Purple scrimmage (at Furman) and saw him pitch that Friday before the game and then headed out that Saturday to the game.”

Webb saw the Tigers knock off NC State by a score of 41-7, and he came away impressed with what he saw.

“That had to be one of my best visits. I loved how everyone treated me. From the GAs taking me around the tour and of course the coaches,” Wood said. “After the game I had a really good talk with coach Bates and coach Venables and they wanted me to come during the spring to come shadow a player to what it’s like on a normal day in the offseason and especially be a part of a normal day as a student there on campus, which I think I probably will do. I know they said they at least want me to be there for a day camp. If not, I’ll just come to visit in the summer again. The atmosphere felt like a pro game, I was so impressed how into it their fans were. I think it was 41-7 going into the fourth quarter and I didn’t see any empty seats behind me, which I thought was really crazy.

“I went to an Arizona State-Colorado game and they’re (Colorado) 5-0 and it’s really tight and it’s a day game to and sold out and it was a tight game, neck-and-neck and their fans went away. That’s what really blew me away. And the Tiger Walk and all the fans crowded along as they walked in - I thought that was pretty crazy. The tradition there is amazing and what Dabo does - not just athletically but academically with all his graduates caught my eye more than anything.”

So far, Wood has been offered by Colorado State, Syracuse, and Texas Tech but hopes a Clemson offer will happen in the spring.

“One of the GAs came up to me - and I’m not sure if they’ve offered a kid in my grade yet - they came up to me and some other linebackers and said they were going to offer me in the spring,” Wood said. “I’m not for sure if that’s real news or fake news...I know Zach said I’m really high on the recruiting board but I don’t know if that’s true or fake. I thought I had a good season this year and put a good amount of numbers up as a sophomore.”

Would he consider going to the East coast with Clemson offer?

“Oh yeah for sure. That’s one of my big things. I’m kinda tired of this cold weather,” Wood said. “We had a practice in a blizzard and 20 degrees. I wouldn’t mind going out there. I want to get out of this state. I want to go explore. I think that’s a big thing with me. I’ve been to the West Coast a lot and Cali and all those areas. It’s definitely something I would consider.”

As for other visits this season, Wood is planning to visit Ohio State for its rivalry game against Michigan.