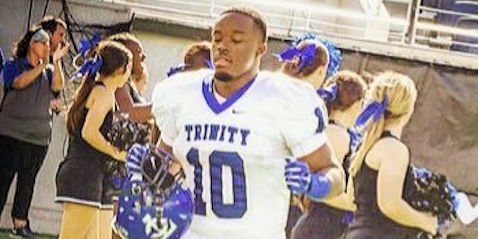 Clemson on Wednesday extended an offer to 2018 inside linebacker prospect Eriq Gilyard, of Florida powerhouse Trinity Christian Academy in Jacksonville.

Gilyard told TigerNet by phone that the offer from the Tigers immediately catapulted Clemson into the top contenders vying for his skill set.

“Clemson goes right along with Michigan and Virginia Tech (in terms of interest level),” Gilyard said. “When I talked to the coaches, they made it really apparent that they like me and want me to come down. I've been looking at Clemson for a while, and I'm happy to get the offer.”

Gilyard, a 5-foot-11, 225-pound defender, also has offers from Alabama, LSU, South Carolina, UNC, Colorado and Oregon State, among others. In his first year with Trinity – he transferred in as a sophomore – the Conquerors rolled to their third consecutive Class AAA title in the state of Florida.

Although he hasn't visited Clemson yet, Gilyard said he plans to do so “real soon,” perhaps attending Dabo Swinney Football Camp. He said he has family in Charleston he'll spend time with during his visit to the Palmetto State.

“I like being able to attack,” Gilyard said of playing defense. “You don't have to sit back and wait on someone else or let someone else dictate how you do (things). I like defense because you go out and attack and hit somebody in the mouth.”

Gilyard said he knew at age 6 or 7 that he wanted to play football in college, and he's been playing football competitively since he was 9. He listed Ben Boulware, Vic Beasley and Sammy Watkins as the Tigers he has most enjoyed watching over the years. He called this past season's College Football Playoff run impressive.

“Over the season I watched Clemson grow and become a powerhouse, really, in college football,” he said. “People always knew they were good, but I don't think anyone expected them to do as well as they did last year, so I was really impressed.”

Gilyard's father, Rashard Gilyard, played cornerback for Auburn in the early 2000s – though the rising junior has yet to receive an offer from his legacy school. Gilyard's godfather, former linebacker Eric Sampson, played at Clemson during the Tommy Bowden era.

“What impresses me most (about Clemson) is everything I hear about the coaches,” he said. In addition to his “god-dad” Sampson – who regularly returns to Death Valley for games – “another close friend of my family played at Clemson a while back, and they just tell me great things about the coaching staff and everyone down there. They just say it's a nice environment. So that's what impresses me most right now, because that's what I hear from everyone.”

Gilyard said he's going to let the recruiting process play out a while before making a commitment, though he said a decision could come “early in my senior year.” He said he wants to attend a university “that can give me a nice degree that can take me a long ways.”

For the time being, however, he's focused on honing his skills, building his strength and helping Trinity Christian bring home its fourth straight championship.

“We plan on winning another state (title) again,” he said confidently.