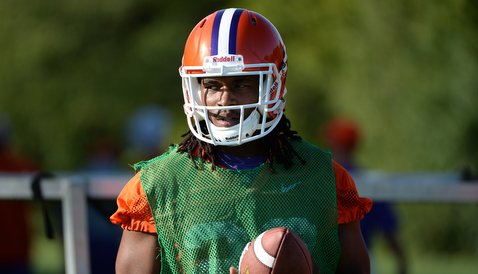 Tyshon Dye was in a green jersey Friday

Chad Morris
Offensive Coordinator / QBs
View Full Profile wants his offensive players to understand that the entire country expects them to take a major step backward this season, and he told the media following Friday’s practice that he lets them know every chance he gets just how bad people think they will be.

He called it “pouring salt in the wound.”

“Every day. Ain’t nobody giving them any credit,” Morris said, tongue planted firmly in cheek. “Look, if we get a first down, I don’t know what we will do. I told them I don’t even know if we should even show up this year. It kind of makes us a little bit sour, and I make sure I pour salt in the wounds of these guys daily. I tell them, ‘Look, Tajh and Sammy and Martavis are gone. I don’t even know if you should even show up today if you listen to everybody talk. They have to have a hard edge about them – a ticked off, pissed off approach. I am going to be a little edgy about this, and that is what these guys need to have. We take pride in saying we are the most explosive offense in the country, and that isn’t going to change. I think these guys just feed off of us as coaches.”

“We wish he could pick up a little bit more,” Morris said. “He's a little bit thin for us, but we'll see. He's a skill guy, and if you're going to play light you better be able to run fast. And he's been able to do that. So we'll see how he shakes out. Still a lot of ball left, and a lot of practices still ahead of us."

Morris on what he has at the tackle spots

Morris on the excitement of the first day of practice

“I think you see he’s patient. He’s got an unbelievable desire to be successful. The average person would be really frustrated if you were in his shoes. He’s been able to be really patient through this whole process. I think that Tyshon is waiting his turn His turn is coming and he’ll be just fine.

“Once we get him on the field and in live contact, we’ll address it from there. Right now, we’re still a ways away.”

“Trevion is really smooth. For a freshman to come in and run the routes like he does, it’s really good to see that,” Humphries said. “He hasn’t fully grasped all of the plays yet, but as a true freshman coming in in July that’s hard to do. He’s really impressed me with his size and stature and his ability to make plays. I’m really enthusiastic about his play.”

“Demarre is a playmaker – great at releases, quick feet,” Humphries said. “He’s a very smart guy. That’s one thing that’s really stood out to me. Anytime Coach [Jeff] Scott asked him a question in the segment meetings, he answers quickly and always has the right answers. That’s one thing stuck out to me about Demmare.”

“Not really. He comes in and is quiet and too himself, but when he comes out on the field he comes to work,” Stoudt said. “I like that about him. He’s ready to play at any time. In the meeting rooms, he’s fun to talk to. He has a lot of ideas that we bounce off of each other. It’s something you don’t find with a rookie quarterback coming right in – confidence in himself. I know that he’ll be able to lead this team when it’s his time.”

"I pride myself in trying to lead my teammates and trying to do my best and do my part, because I can't ask anyone to do anything that I'm not willing to do,” Jarrett said. “So that's a role I'm prepared to take, if so be it. I’m just out here trying to do my job."

Tony Steward
Sr. Linebacker
#7 6-0, 235
Hastings, FL
View Full Profile on the possibility of getting a redshirt year back

“Not really. We’re all past that and it’s all in the past,” Steward said. “It was unfortunate, but that’s how it is sometimes. You get dealt cards and you’ve got to play with what you got.”

***In the next couple of days, we will have stories on the Beard Gang from Ryan Norton