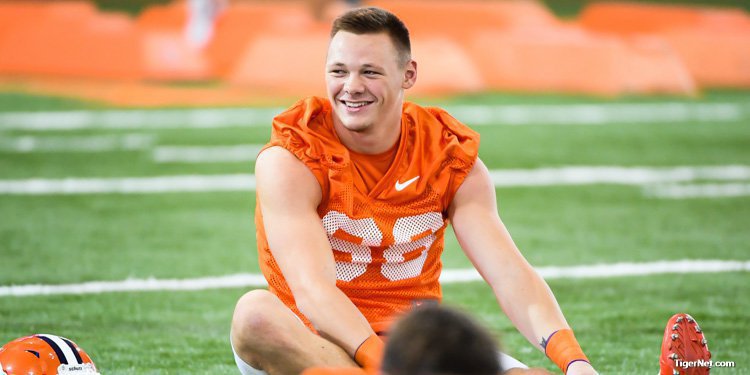 Hopper is all smiles at practice earlier this week

CLEMSON – The Tigers have made their name as Wide Reciever U and have four and five stars flocking to play for the defending national champions, but Clemson won’t turn down a gritty walk on who is willing to work hard and earn their strips.

Renfrow made his way as a walk-on from Socastee High School and paved the way for Jayson Hopper – the 6-1 redshirt freshman from Lexington (SC).

Hopper – who attended Tri County last year – had offers out of high school from Appalachian State, Charleston Southern, Presbyterian and The Citadel, but decided to live out his childhood dream of playing football for the Clemson Tigers, despite Jeff Scott trying to talk him out of it.

Clemson’s offensive coordinator and wide receivers coach first met Hopper at head coach Dabo Swinney’s high school camp and it was then that players and coaches, alike, realized that Hopper had a gift not only as a wide out but also off the field.

“I can tell he's made of the right stuff. He's the first guy in the eight years that I've been at Clemson that after football camp our current players have come over to me and said, 'We need that guy on our team,'” Scott said after Clemson’s practice Saturday. “We've had all of these four and five-star wideouts and they watch them and know what they're good, but I've never had as many players come and tell me we need a guy on our team as much as they said Hopper. That's because of his attitude, his work ethic, his grit. I'm really pleased with him.”

Scott knew that Hopper had offers elsewhere and gave him his best sales pitch to encourage him to take the scholarship, but Hopper had a well-thought out, persuasive pitch of his own.

“I've got a lot of respect for Jayson. He was one of those guys that I actually tried to talk him out of coming here as a walk on because he had scholarship offers to other schools and I knew how deep we were going to be at the wide receiver position,” Scott said. “Sometimes for a walk on, it all depends on that year, what the opportunity looks like.

"Usually, your numbers go in cycles and I had a feeling we were going to be really deep from a scholarship standpoint, so I was very honest with him. I called him in December to give my best shot and encourage him to go somewhere else where he would be on a full run and be able to be a two or three-year starter. At the end of the conversation, he convinced me he needed to be at Clemson and the reasons why.”

With nine scholarship wide receivers, Hopper will have his work cut out, but Scott said if Hopper’s story works out the same as Clemson’s head coach, he’ll be just fine.

“A lot of it had to do with the culture and the things off the field. He's inspired by Coach Swinney and his story,” he said. “Jayson's story is similar in some ways. He's done a really good job. He's made two or three big catches out here.”