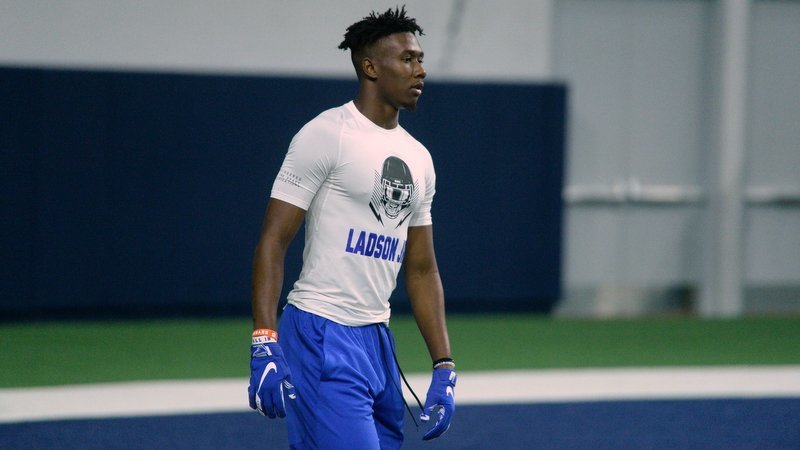 Nike’s The Opening Finals got underway at The Star, otherwise known as Dallas Cowboys World Headquarters, Saturday morning as quarterbacks, wide receivers and tight ends worked out at the Ford Center, the Cowboys’ indoor practice facility.

Temperatures outside soared into triple digits but Clemson wide receiver commit Frank Ladson was bringing the heat in the climate-controlled conditions of the Ford Center.

Ladson, the 2019 prospect out of Florida, was one of a handful of wide receivers on hand. Unlike last year’s Finals in Oregon, this one didn’t seem to have a whole lot of “working out” with the receivers. Instead, the coaches on hand were going through the route tree and giving instructions on the routes the receivers will run this week.

That didn’t stop Ladson from showing out. He started the session by grabbing a pass that was a few feet behind him, made another nice grab on a fade in the end zone and was able to get in and out of his breaks fast.

I talked to one of his coaches after the session, and that coach told me, “I love that guy. He’s going to play on Sundays, I really believe that. He’s also a quiet, humble, superstar. You don’t see that a lot out of wide receivers, but he just goes about his business and he’s very coachable. There is a reason he is going to Clemson – Clemson is where the humble superstars go. They do things the right way and get the right kind of kids.”

*The things you learn out on the road. I was told by one of the coaches there that 5-star quarterback D.J. Uiagalelei (pronounced ooee-onga-la-lay), out of Bellflower (CA) St. John Bosco can’t stop talking about his Clemson visit earlier this month. 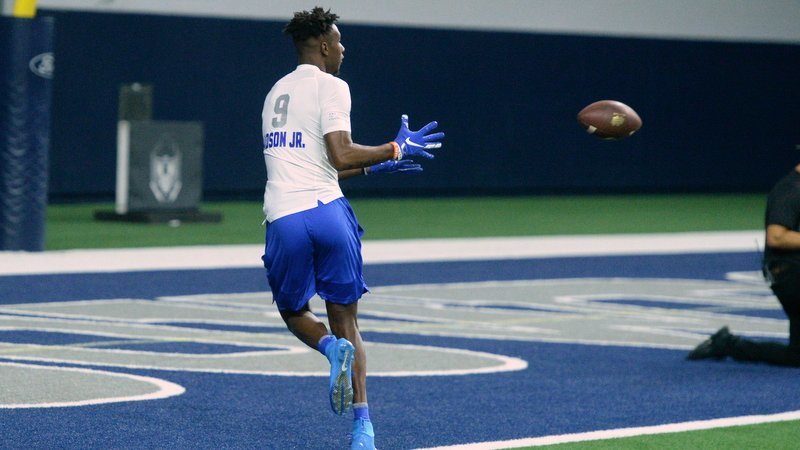 The coach said that in his mind, the quarterback prospect is down to two schools – Clemson and Oregon. Oregon is obviously closer to home, but Clemson has staying power in this one.

*Another impressive prospect out there today was Braedin Huffman-Dixon out of Mater Dei (CA). Huffman-Dixon was at Swinney’s camp earlier this month, and he’s intriguing. We wrote then that he was one of the best prospects we saw during the camp, regardless of position, and he impressed again Saturday.

Rivals has him rated as the No. 35 wide receiver nationally.

He committed to Colorado earlier this spring, but he also told me that he made his way to the Clemson camp from California because Clemson is his dream school. He said he is hopeful the Tigers will offer at some point this fall if room opens up for another receiver in the 2019 class. If an offer goes out, my guess is that he would commit.

I have more from Huffman-Dixon that I will run later, but he told me that his favorite wide receiver is Mike William and loves to watch how Williams performed on that final drive against Alabama in the National Championship game. He said he had cold chills watching that final drive.

We know how ya feel, kid.

*Clemson doesn’t have a quarterback competing, but I still took the time to watch the quarterbacks. Hopefully, they get better as the event progresses. I was impressed with the raw potential of Jayden Daniels of Cajon (CA) and the accuracy of Taulia Tagovailoa. The other quarterbacks were simply underwhelming at best, but it was the first day with new receivers.

Daniels is a 4-star dual-threat quarterback and is the No. 3 rated signal caller in the country according to Rivals. He has offers from most of the big names in the country including Alabama, Florida, Georgia, UCLA and Ohio State among others.

This is the Ford Center, the Dallas Cowboys indoor practice facility pic.twitter.com/MNN0zS1US5