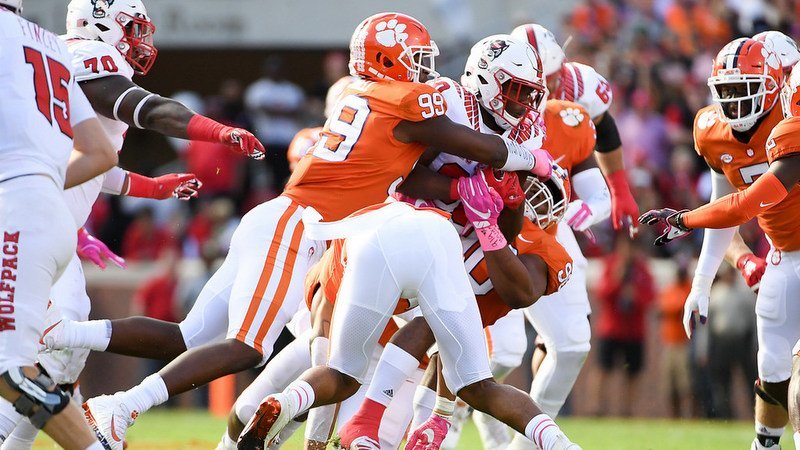 CLEMSON – Brent Venables had a good feeling his defense would dominate Wake Forest two weeks ago when the Tigers got off the bus. A fantastic week of practice and an air of confidence surrounded his group, and he knew the Demon Deacons would pay the price.

Fast forward to Saturday, and Venables wasn’t as confident against the Wolfpack. Practice during the week was good but not great, and he wasn’t sure he had the full attention of his group.

After the game, Venables sat down in a padded chair, play sheets gripped tightly in his left hand, and smiled as he faced the media. The smile was genuine, all doubt erased after the Tigers’ manhandled the Wolfpack offense for much of the day.

NC State gained just 297 yards after putting up over 500 yards in four of the previous five. The Pack gained 100 yards in the first half after a 31-yard first quarter.

“Our guys played really well, I am super proud of them. We’ve really been in a rhythm the last three weeks,” Venables said. “We are really understanding who we are. Just really proud of the effort our guys put out today. We played with some physical toughness. We are defending the passing game. Our guys just came out and really made a statement with a good three and out. I think it was Simmons that came through on an outside blitz and set the tone for the day. We were really good at all three levels today. We were far from perfect and there will be plenty of things we can learn from. What a great win for our football team. Our cohesion was great today.”

He smiled when was asked if he had the same feeling Saturday as he did getting off the bus at Wake.

“To be honest, I wish I could say that I did. I didn’t feel as good about this one if I’m being honest,” he said. “What I thought I saw at practice doesn’t necessarily translate to gameday. Our guys played really, really well today. Our guys didn’t have a bad week of practice, but I was just concerned with the procedure.”

Venables said he felt like his group needed redemption after letting NC State hang around the last couple of seasons.

“I think they just knew the quality of the opponent. I don't really know what was said and all of that. We have also felt in the last couple of years that it didn't have to be close and those games didn't have to go down to the wire,” he said. “We looked hard at that. Last year, we didn't play great or coach great, so from a redemption standpoint, there is something to be said from that. We have a chance to be a really good defense but we are not a really good defense yet. Today was a good performance and let's see if we can continue to the grind and put in the work. We beat a good opponent handily and that is all we accomplished. Our guys, are we going to stay hungry and focused?”

Linebacker Jalen Williams came up with a big interception against the Wolfpack, and he told the media after the game that you can’t give Venables two weeks to prepare for an opponent.

“He is a mad scientist about the defense. He is crazy about it,” Williams said. “You can’t give him two weeks to prepare and two weeks for us to learn. He breaks it down so well, and to give us two weeks is a blessing. That is why we played so well.”