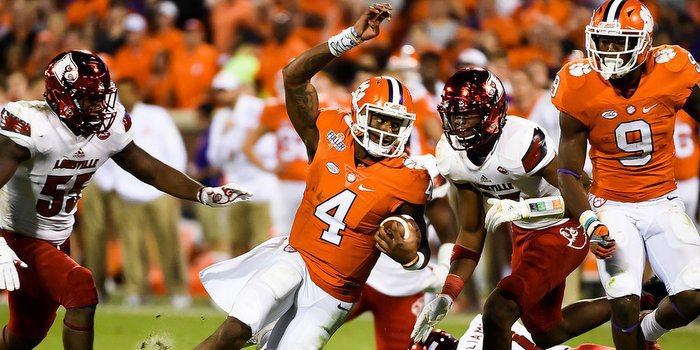 CLEMSON – During Clemson’s win over Louisville last Saturday, there were periods when Clemson’s offense looked fast and running the type of tempo Clemson fans have come to expect since Chad Morris arrived in 2011.

Especially when the Tigers ran down the field at the end of the first half, marching 73 yards in just four plays and 32 seconds to take a 28-10 lead into the locker room.

Offensive coordinator Tony Elliott told TigerNet Monday that is was a drive that was executed to perfection.

“I know that with Coach Swinney, part of what we do is being aggressive and we're playing a game where points are at a premium and we're going to have to score points,” Elliott said. “We felt like the defense was playing well. We had some momentum so let's at least go and try to get a field goal out of this and the guys executed to perfection. We did get a little help because one time they tipped their coverage and we were able to make a check that got us down inside the 10-yard line where we could call the play to get that last touchdown.”

“Really, the only time we want to slow things down potentially is on third down, especially on those third and medium or third and long situations where we've got to get the best play called possible to give us a chance to stay on the field,” he said. “I think people are going to look at that third quarter, which was a funky deal. We're playing that first drive and boom we're off the field and then we have a punt and then we're moving the ball and playing with good tempo then we have the fumble. I think that third quarter is the only time we didn't have great tempo because we were out of rhythm. We weren't able to establish that rhythm because we were on the field, off the field, on the field, off the field and then we were finally able to get things going in the fourth quarter.”

The Tigers scored 23 points in a nearly-flawless first half at Georgia Tech two weeks ago but scored just three in a plodding second half.

“I think at Georgia Tech - the third quarter was strange again. We had seven plays in the third quarter,” Elliott said. “I think at Georgia Tech there was more of a concerted effort to hey let's try to really establish the run because we did a really good in the first half of mixing it up and keeping them off balance and it led to points quickly. We wanted to commit some time to really running the football, but hats off to Georgia Tech because they made some adjustments schematically and they knew we were going to want to run the football and they were geared up to take it away.”

Quarterback Deshaun Watson is often seeing gesturing to the sidelines in an effort to speed up the playcalls, but Elliott says there is more to it than just sending in a play.

“I think everybody understands that tempo is a big part of what we do and I think a lot it is there are some delays,” he said. “The play calls were in pretty quickly and then you've got to signal it in and then a lot of times you're signaling it multiple times because the running back, if he's running the ball he's on the bottom of the pile and the play is already in, so sometimes you've to roll it again so everybody gets the call. There are a lot of things that we have to work on to increase the tempo, but overall I think the last two weeks, especially in the first half, the tempo has been where it needs to be.”