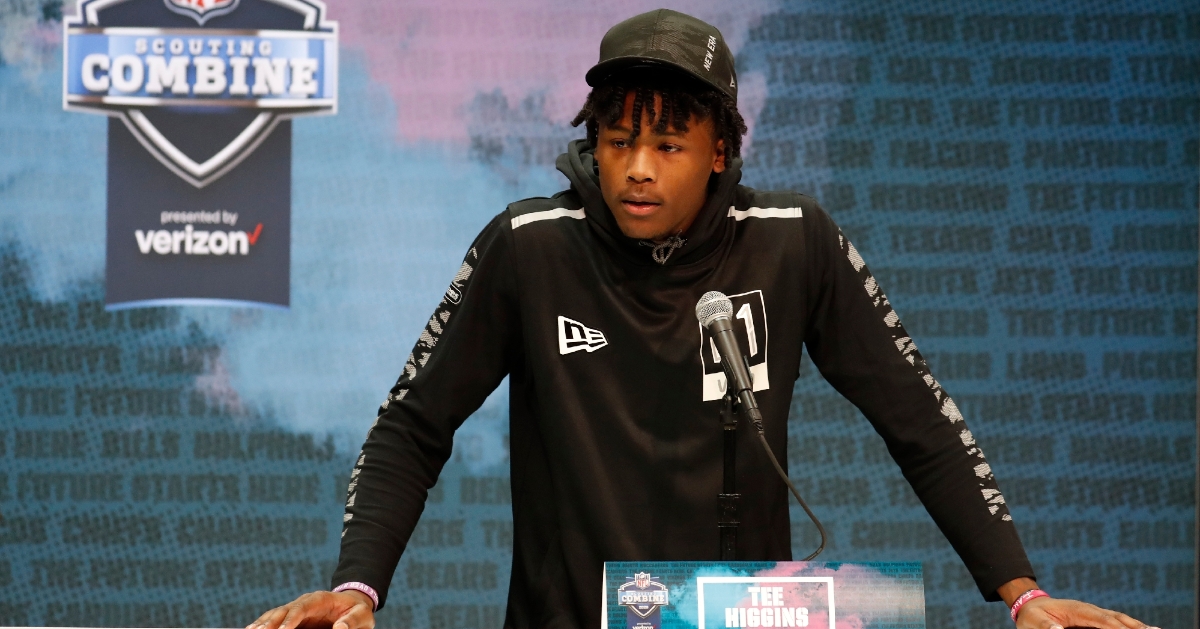 Higgins speaks with the media at the Combine (Photo: Brian Spurlock / USATODAY)

The wide receivers and tight ends were among the groups to be measured Monday at the NFL scouting combine, and Clemson receiver Tee Higgins was one of the early big winners.

The NFL Scouting Combine is being held in Indianapolis this week, and Higgins met with the media Tuesday following his first session. Higgins had 68 receptions for 1,044 yards and 18 touchdowns during his senior season in high school. Rivals had him ranked as the No. 2 wide receiver prospect in the nation, and the No.1 overall prospect in Tennessee in the 2017 recruiting class.

Higgins participated in the measurables/weigh-in portion of the Combine and tested as one of the better all-around receivers with a wingspan of 81 inches while checking in at just under 6-feet-4 and weighing in at 216 pounds. In other words, the prototypical NFL wide receiver.

Higgins is entering the NFL Draft coming off a stellar junior campaign in which he had 59 receptions for 1,167 yards and 13 touchdowns in 15 games played. He had nine catches for 182 yards and three touchdowns in the ACC Championship Game against Virginia and ended up as a First-Team All-ACC selection for 2019.

However, Higgins took a shot to the head early in the Fiesta Bowl and was not much of a factor during Clemson’s 29-23 win over Ohio State, catching four passes for a total of just 33 yards. LSU’s defense also contained Higgins – he had only three catches for 52 yards but did post a 36-yard rushing touchdown.

That sweep shows his versatility.

"They call it, I’m gonna make something happen. We put that play in that week actually and I was surprised when they called it,” Higgins said. “I was actually cooked, I was really tired because it was a long drive, but when I ran that guy over I got a lot of buzz from it. They didn’t think I was physical but it changed a lot of guys' minds with that play."

What does he think he brings to the table?

"Obviously I’m a tall receiver and I’m gonna win a 50-50 ball 80-20 my way,” Higgins said. “A lot of people thought I was a slow, tall guy, but the film speaks for itself— I’m not slow, I’m a tall guy that’s got great speed. I model my game after guys like Julio Jones, AJ Green... With Julio, he’s physical and got good, long speed and with AJ, he goes up and attacks the ball at the highest point."

Where does he need to improve?

Higgins has excelled at the “50-50 balls” during the course of his career – going up and jumping over a defender to catch a pass – and said his basketball background has helped in that regard.

"I use my basketball background to help me with those balls, you know boxing out,” he said. “If I’m behind a defender I just use my jumping ability for like a rebound. A guy like AJ Green, he attacks the ball at the highest point, and it’s just something that’s always stressed at Clemson."

Higgins isn't known as a speedster but definitely has a goal in mind for when he runs the 40-yard dash Thursday and thinks he is the best receiver in a deep class.