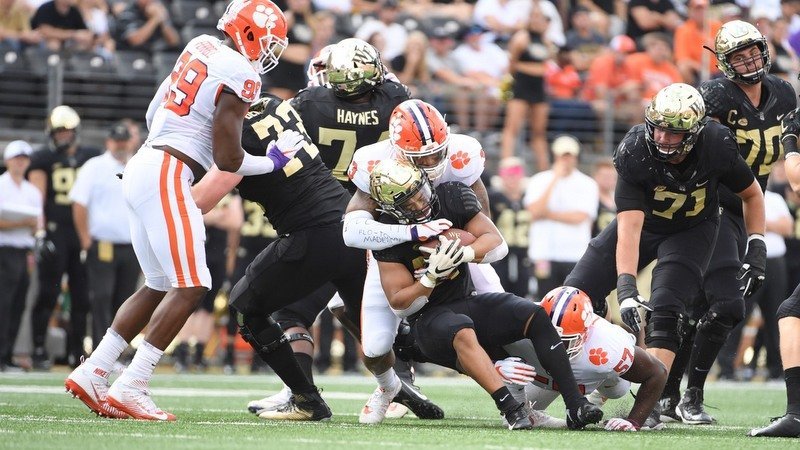 The program not only needed to just win the ballgame, the Tigers needed to dominate, throw a few style points out there for the national pundits, and most of all they needed to win to put the hurt of the past week in the rearview mirror.

The Tigers head into the open date with a 6-0 record, including a 3-0 start in the ACC. Two of the three wins have come on the road, including Saturday’s 63-3 demolition of Wake Forest.

"Yeah, I don't think there is any question [that we needed this]. I wanted to see this team. I thought last week, as I said, was one of the best wins I've ever been a part of,” Swinney said. “I know a lot of people will look at it and say Clemson beat Syracuse in game five of season 2018, but I'm telling you that's one of the best wins I'll ever be a part of. It was amazing because the score didn't tell the story. What I saw in our team, seeing our team stick together and have each others back, being built to win, it's just special. I really felt like we were going to play our best game this week. I didn't know it'd be 63-3, but I thought we were ready to go out and play a complete game and complement each other well. We did that.”

“We had a great week of practice, a great week, and these guys were bought in, they were dialed in,” he said. “Great meeting last night, I just had a good feel for our team and I just felt like this would be one of those games that we can really make a statement with. I thought the team did that and it's what we needed in momentum and confidence going into this open date. Last year we lost a game and came back and won the rest of them. This year we have won so you go away and you still have to come back and play football but I certainly think this is a team win."

Clemson ran for 471 yards on offense and played a suffocating defense.

"It's a nice luxury to have (the running game and defense). There's nothing wrong with punting the ball when you have a lead like we had,” Swinney said. “I didn't get that frustrated when we had to punt, because we could get our defense out there onto the field. I don't mind seeing our defense take the field, because they are really good. It's a big luxury knowing that you don't have to score every time you get the ball. We had a couple miscues early, like dropped passes and bad timing on snaps, but it's just some small things that we have to continue to iron out.

“We're going to play some teams where we those mistakes will cost us, because we won't have the margin of error we had today. We're still a work in progress, but we can run the ball. Like I told everyone in preseason camp, our running backs are going to be special. I think they can be some of the best in the country."

One of the stars was freshman running back Lyn-J Dixon, who rushed for a career-high 163 yards.

“This is a game that we can all gain some confidence. In the last game, he was kind of all over the place, kind of scattered, and he's just still growing into what we need him to be,” Swinney said. “We still subbed him on some pass protection things; it's not that we don't trust him, it's that we don't have very many quarterbacks and we have to do what he's comfortable with.

“Absolutely, seeing him go out there and perform like he did today, that's what we saw him do and practice and we knew that he was going to be the guy that helped us win some games. But we just have those three veteran guys in front of him and they're just more complete players. He definitely helped his case today. What he showed us today was that if we need him, he can do it. It was a lot of fun to see that."