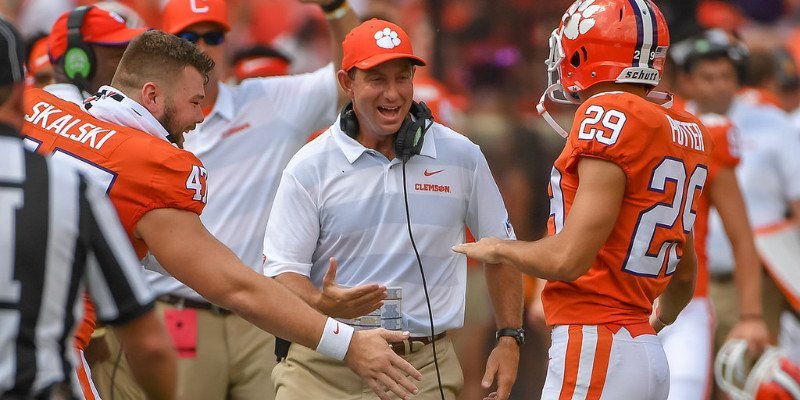 CLEMSON – Another special group is preparing to walk through the door at Clemson.

Many of Clemson’s seniors will graduate on Thursday, and it’s a group that has a chance to become the winningest senior class in college football history. Upon the opening of the early signing period on Wednesday, a total of 26 players signed National Letters of Intent to play football at Clemson, a group that head coach Dabo Swinney thinks will be just as special.

The early signing period will conclude on Friday, Dec. 21, prior to National Signing Day on Feb. 6, 2019.

“I'm just really thankful to the young men that have chosen to be here,” Swinney said. “This is our ninth top-15 class in a row. I do know this, we have become very consistent on the field and off the field. You go upstairs at the graduation thing going on right now, and it just never ends. You know, you've got guys going out the door, you got guys coming in the door and I love that whole transformation process that takes place. From that high school kid that walks in, to that grown man graduate who's getting ready to go out into the next phase of his life. So it's really special. But we've been very, very consistent. And I don't have any doubt that this group will be special.”

Swinney said this is the largest class since 2011.

“I think we signed 29 that year. And you go back to that class, that was the Grady Jarrett and Stephone Anthony class, that whole group. And you think about what they accomplished. It's amazing what that class went on to do and that's really kind of how I measure those guys. I think time tells ultimately how you did. I don't think present-day rankings really matter that much because that's the potential. I think the rest of it's based on performance. We've never signed the number one ranked recruiting class since I've been the head coach in 10 years, but yet we were maybe second or third in wins over the last 10 years.

“So, I think that speaks to the evaluation and the development that we have in place here in our program. But I think this group will turn out to be special and I can't wait to see what they do over the next four or five years. Just like that last big class that we signed back in 2011. We're graduating the winningest senior class in ACC history and, if they can find a way to win two more, it'd be the winning his class in college football history.”

Sixteen of the signees will enroll and be in class in January.

“We've got some very talented individuals that are leaving and, it's critical that we bring in a great group to replace them. And I think that we've done that,” Swinney said. “We signed 26 today, 16 mid-years, and most of these guys had been committed for a long, long time. Whether it be back in the spring, summer or even an early part of August, most of this class has been together for a long time and we definitely met all of our critical needs for sure. And then some in some areas. We'll get back together in February and we'll see what happens and shakes out between now and then. I have no idea. Sometimes juniors decided to leave early sometimes. Maybe a guy decides to graduate, move on, who knows. But we'll also have some preferred walk-ons that'll sign up with us in February and into the summer.”

The Tigers signed players from 14 states.

“We have 14 states represented in this class. I think that is a just amazing reflection of the strength of our brand,” Swinney said. “All these kids that have grown up watching Clemson and watching the success of our program on and off the field and they want to come to see you. They want to come to be a part of it. And we all know that when a guy comes to Clemson, they realize this is a special place. And so it's been really neat for me to travel around to so many different places and kind of validate and see firsthand why they chose us. Because when I go and I see their environment and their type of families then it's very easy for me to see and get exactly why they chose Clemson and why they felt like we were a good fit for them.”