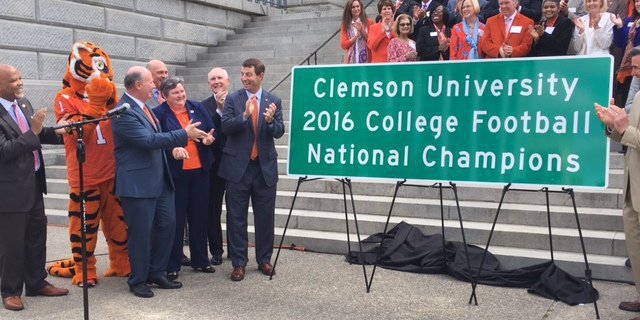 Swinney holds a press conference on the steps of the Statehouse

COLUMBIA – Clemson head coach Dabo Swinney could very well have been kicking off a gubernatorial or presidential campaign with the speech he gave in front assembled lawmakers Tuesday afternoon.

Swinney and the Clemson football team were honored for the 2017 College Football Playoff National Championship at the South Carolina State House, and Swinney’s remarks showed the type of passion that marks him as one of college football’s most recognizable figures.

It’s also the type of passion many would love to see from their elected officials.

“I'm here because football unifies. and I am standing here in a rare occasion where we have senators, representatives, Democrats, Republicans, Gamecocks, Tigers, Bulldogs, and whatever else,” Swinney said. “But we are all here as South Carolinians, and we all have this common bond which is the love of this state and the want to see this state be the best that it can be.”

Swinney said that Clemson’s success came from doing a “little extra” and then proceeded to coach the politicians in attendance. 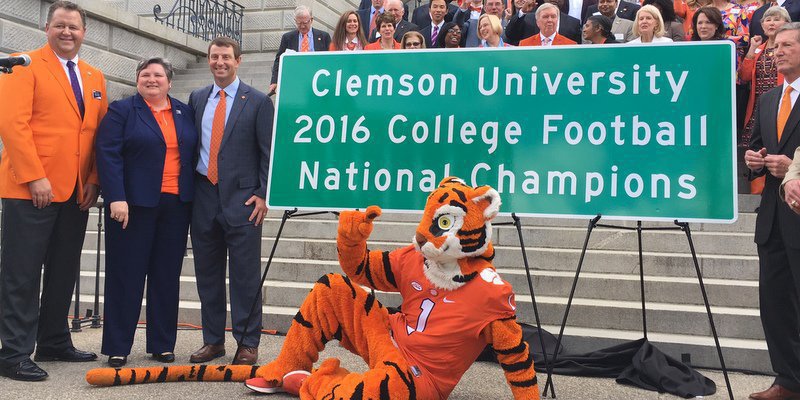 Swinney holds a press conference on the steps of the Statehouse "

“I would ask you to raise your hand if you love the state of South Carolina. Raise your hand. Now do this for me - raise it as high as you can raise it.” Swinney said. “Did you see that?You can put them down now, but that is what it takes. For us to have the best state, it takes that little extra. It's that little extra that it is going to take for every single one of you to be the best representative, to be the best senator, to represent the people who elected you to do your job. That little extra to get along with that person you don't really get along with, but you have to find some common ground for the betterment of this state. It takes a little extra.

“It takes a little extra. That is what we talked about all year. If you watched our team play on that last drive Jordan Leggett's fingers grew six inches longer, Mike Williams hung five more seconds in the air. You know why? They all loved each other. They are all from different backgrounds, but they came together for a common goal and that is what the game of football does. And the last play of the game that number four throwing to number 13 is what it is all about. Phillipians 4:13: For I can do all things though Christ who strengthens me. All things. So, I stand here before you today as the first graduate in my family. And the reason I am here is because of my Lord and Savior and I can do all things [through Him].”

“The last thing I did with our players before we took the field is I took out a two-dollar bill,” he said. “I said, ‘You know what this is?’ I said this is how the Clemson fans travel and how they leave their mark wherever they go. They want to leave their mark. I asked our players if they knew how they left their mark. By how you play the game. And what I would tell you is that none of you are guaranteed to be reelected. You leave your mark by how you love, serve, and care for your community and each other. So how you are going to leave your mark is how you govern and how you lead this state. I'm so thankful that I am not in politics because I know how hard of a job you have. I thank you for what you do because somebody has got to do it. Thank you for being willing to stand up and take that charge. God bless you and Go Tigers.”