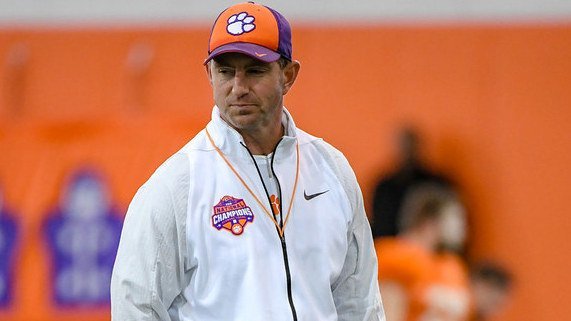 ATLANTA, GA – Don’t tell Clemson head coach Dabo Swinney that the Tigers’ football schedule isn’t up to par with the rest of the nation. One media member suggested that Wednesday and drew Swinney’s ire.

"Clemson's schedule is so soft," he said on the Paul Finebaum Show last Wednesday. "We are talking about one of the easiest schedules in the Power 5. They are two-touchdown favorites over everyone on their schedule, and the toughest game is at South Carolina."

Swinney took offense when someone asked about the schedule Wednesday. The media member asked the following question while Swinney was at the College Football Hall of Fame in Atlanta Wednesday for the MacArthur Trophy Presentation as the 2018 College Football National Champion.

“Coach, I was talking to Will Muschamp last night, who is starting his Spurs Up Tour and we talked about the schedule. I know there has been a lot comparison between South Carolina’s and Clemson’s schedule, and people say you have a very easy schedule and South Carolina one of the hardest. He felt like, ‘Hey, we have a difficult schedule every year.’ Do you feel the same, as far as Clemson, despite, you know maybe the lack of competition in the ACC?”

“Boy, that’s a loaded question, isn’t it? We have played Alabama three times in the national championship. We played Ohio State. We played Oklahoma. We play Texas A&M. We play South Carolina every year,” Swinney said. “Our league, I think we had eleven bowl teams this year, ten the year before and eleven the year before that. Our league is incredibly competitive and deep.”

The Tigers have won two out of the last three National Championships and have made four consecutive appearances in the College Football Playoff, fashioning a 5-2 record over those four seasons. Swinney said the ACC prepares the Tigers for the postseason.

“We had great success in the postseason, but the reason we have been successful is (because of) how our league prepares us,” Swinney said. “And then we step out of our league, and we play people. For example, we play Texas A&M. We play South Carolina. I think that is a great conversation for people and for whatever reason, people never really want to give the ACC the respect it deserves.

“No one is going to be excited to play any team from this league. This is a great league. Now, that does not mean we are better than anyone else. Just watch the draft. You can look over probably the last five years or so.”

Swinney closed by saying the ACC and the SEC are both very good leagues.

“I think the SEC and the ACC … I don’t even think it is close from a draft pick standpoint. I think it is us two and it’s way apart. This is a great league. Our schedule is going to be a very big challenge. It is going to be very difficult. Nobody knows anything about any team right now.

“All I can tell you is that we have not been consistent because we do not play anybody. You have to play well, and you have to be prepared to play well, especially when you get to postseason.”