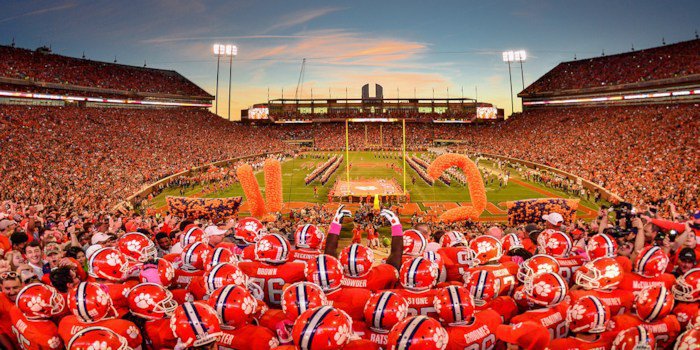 Radakovich told the media that the new fee will be totally elective and students will still have the opportunity to attend home football games for free.

“We have been discussing the student purchase of tickets for about 24 months. I know how it might look that all of these things are converging together,” Radakovich said. “It's just kind of happened that way because we want to make sure as we move forward with the student ticket plan that the students understand it before they leave to go home. That's just in a couple of weeks. We've had meetings with the students and it's no great secret, they don't want to do that. It's been something that's been part of Clemson for an awful long time.

“The way our plan is looking right now, lower deck tickets would carry a contribution to IPTAY. The upper deck tickets - the 3,300 tickets in the upper deck - would remain free so that if students were not able to pay those dollars, they couldn't certainly still come to games. There is value in the lower deck and there's value in the hill and we're just looking to gather that with our students.”

The fee would be $225 per football season and the students who choose to participate would no longer have to worry about claiming a ticket for each home game.

“We're looking right now at $225 per season,” he said. “They would have season ticket and it would be theirs and they would know they were going to the game and there would be no weekly signup. It is theirs. We're looking to move forward with it this fall.”

The $225 price tag is in line with what other universities charge and would be a discount over what season ticket holder pay as well as generate millions of dollars of revenue.

“It's what we thought the value would be. Some schools might charge a value to all students - 80 to 100 to 125 to 250. Virginia, the leader in the clubhouse at $670 per student and generating 13 million dollars for their athletic program each and every year.” He said. “This program would generate a couple of million dollars for us - about 1.8. That's how we looked to create some value points. We knew we wanted to keep the upper deck free, so that put us down into the lower deck. General season tickets or IPTAY season tickets are $365 so a significant decrease or discount from those tickets.”

Radakovich said that Clemson is the only school in three of the Power 5 conferences not charge for football or basketball tickets, and that the athletic department is also looking to improve the student section areas, especially those in the upper deck.

“We're the only school within the Southeastern Conference, the Big 12 and the ACC that does not have either a student fee that everyone pays - every student on campus - or a ticket fee for football or basketball and some schools have both,” he said. “We're looking at the lower deck for tickets for students and leaving the upper deck for free. In the upper deck, one of the things we're going to do - right now our students are spread along the upper portions of the south upper deck, but what we want to do is consolidate them to the two eastern most sections so they can sit together and actually have a great student experience even though they would be in the upper deck. There is great opportunity with the very big concourses in the upper deck for there to be something really special up there.”

An online petition was started by a Clemson student on Monday protesting the idea of a fee for tickets. The petition listed several reasons why you shouldn't have to pay for football tickets including the tickets were already included in the cost of tuition, the high cost of tuition, and a tradition at Clemson of not charging students for tickets.

As of Tuesday morning, the petition had 5000 signatures.

The Athletic department responded to the petition with the following release.