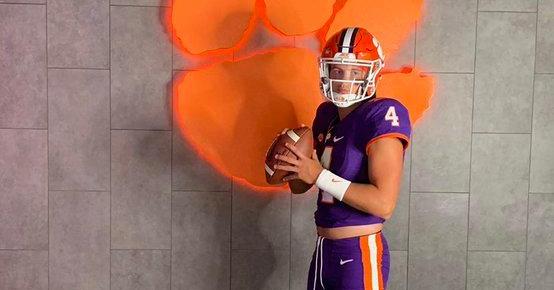 Gauthier poses in front of a Tiger paw

One of the Peach State’s top quarterbacks for the 2021 recruiting cycle visited Clemson last week, and he hopes an offer will soon follow.

Colten Gauthier is a 3-star prospect out of Dacula (GA) Hebron Academy that boasts 17 offers, and he says that the Clemson coaches have been in constant contact with his coach.

“Clemson coaches have been talking to my head coach Jeff Saturday ( Indianapolis Colts center) for months and coaches came by my school to see me in the spring,” Gauthier told TigerNet. “I was invited up for a visit by Coach Streeter to come up. I have been in weekly contact with him for the last three weeks.”

Gauthier made the trip to Clemson last Thursday for a three-hour visit.

“I got there around 3:00 PM and left around 6:00 PM,” Gauthier said. “We toured the campus, stadium, academics and football facilities, and we spent one-and-a-half hours with coach (Brandon) Streeter in the quarterback room. We talked about Clemson football and the culture they have developed and why it is different. As far as the offer, he said that I am a high priority for them and he wants to see me throw live. He is coming to a practice or a game this fall.”

What was the highlight of the visit?

“I would say there was a bunch of highlights. Being on the field at the stadium and walking up and down the hill and being able to touch Howard’s Rock also talking to Coach Streeter for one-and-a-half hours in the QB room about Clemson football and the culture,” Gauthier said. “They also told me that I am a high priority for them at the QB spot for 2021 class, and hopefully he will offer me after he sees me throw live this fall at my practice or one of my games.”

Gauthier has set some unofficial visits for the coming season. He is going to Clemson September 7th, UCF September 14th, and South Carolina September 28th.

Had an unbelievable visit to Clemson ! ?? #ALLIN pic.twitter.com/Iu6g51Zpo3