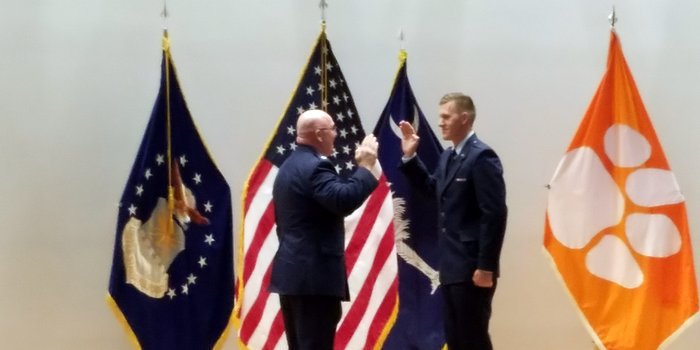 CLEMSON – A half mile away and four months removed from Death Valley, a place where thousands gathered in late January to celebrate a national championship, a little over a hundred people gathered for a celebration of a different sort.

And I was once again reminded of what it truly means to be a Son – and Daughter – of Clemson University.

As football fans, we love to celebrate the success of the Tigers that owned the gridiron this past season, and we rejoiced when former Clemson players held up their new NFL jerseys following last month’s NFL Draft. They will change uniforms, but our allegiance to them will always hold true.

Wednesday morning, however, I joined that small group in the Self Auditorium of the Strom Thurmond Institute to celebrate a different team, a team that will leave Clemson this week and head out into the world to military installations across the globe. They will all wear the same uniform, and they are heroes to me, more of a hero than any athlete could ever be.

Air Force ROTC Deatchment 770 held its Officer Commissioning Ceremony Wednesday morning, with 11 Clemson students earning their bars as Second Lieutenants in the United States Air Force. I was invited by former Clemson receiver Sean Mac Lain, a former walk-on receiver who juggled his life as a student, a football player and ROTC Cadet.

Mac Lain’s family is like my own, and he was sworn in by Lieutenant Colonel Michael Mac Lain – his father – and his bars were pinned on by his mother and his brother, former offensive lineman Eric Mac Lain. 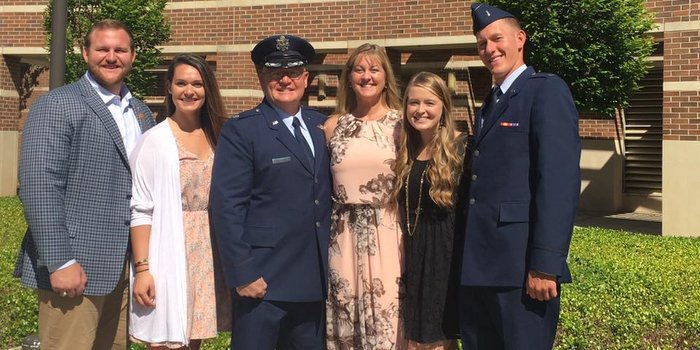 I sat down, and the ceremony began, and the opening prayer reminded us all that these bright, energetic and ambitious young people were stepping out into the unknown.

We are here to celebrate those who will stand in the gap for those who can't defend themselves.

Clemson University has a long and storied military tradition that dates back 117 years. More than 10,000 Clemson alumni have served in the armed forces, and Detachment 770 is one of the most decorated large-size detachments in the country. As the ceremony continued, I was reminded that these young people are, in so many ways, true representatives of the school that we all know and love.

Some of those alumni who have served have received the nation’s highest military decoration — the Medal of Honor — for acts of heroism in combat. Several were captured and held as a prisoner of war. And 489 alumni have made the ultimate sacrifice in service to their country.

Colonel Christopher R. Mann, the Detachment Commander, told everyone that these days are always beautiful days on the Clemson campus. He said he’s been through several, and each day is a picture-perfect copy of the previous. Wednesday was no exception, with warm weather and sunny skies the rule of the day.

Colonel Mann reminded them that while they are now officers in the Air Force, they are and always will be Tigers, and I thought to myself that this is the way it’s always been – we send our best and brightest into harm’s way so we can sleep well at night.

He told them that they had to put service before self, and I thought back to Sean. He was a leader on last year’s team, and I remember him standing in the WestZone over a year ago, telling me that he was going to come back and play and win a National Championship for his brother Eric. He wasn’t going to be denied, and even though Sean didn’t play a lot, it was that “service before self” attitude that turned him into the leader he is today.

Colonel Mann then said, “Clemson has an exceptional military heritage, and you are now a part of that heritage. Protect that heritage.”

(At that point, confetti was falling, if you get my drift).

No matter where you go on campus, there are reminders of that heritage, and it’s part of what makes Clemson so special. Whether it's Bowman Field, the Scroll of Honor and Memorial Park or the Military Heritage Plaza, that heritage is on display. In many ways, I was envious that these 11 would now be a part of that heritage, while I will always only be a thankful observer.

Sean and the others raised their right hands, and repeated the oath:

I, (Full Name) having been appointed a Second Lieutenant in the United States Air Force, do solemnly swear (or affirm) that I will support and defend the Constitution of the United States against all enemies, foreign and domestic; that I will bear true faith and allegiance to the same; that I take this obligation freely, without any mental reservation or purpose of evasion; and that I will well and faithfully discharge the duties of the office upon which I am about to enter, SO HELP ME GOD.

The ceremony ended, and as the group posed for one last photo, a member took the time to remind everyone – again – that they are all Tigers and started Cadence Count. Loudly. It wasn’t the same as the thousands who cheered on the football team – it was better.

These young people remind us all what it means to be a Son and Daughter of Clemson, and they will take that spirit with them into the service of their country, proud representatives of the institution we all love so much.

I walked out of the building and got into my car, but I couldn’t go home. Not yet. I drove by the Scroll of Honor and Memorial Park, looked at the names of our fallen that are etched in stone, and prayed a silent prayer for Sean and the members of Detachment 770.

Thank you Sons and Daughters of Clemson for your service, and thank you Lt. Colonel Mac Lain for making me a part of your extended family.