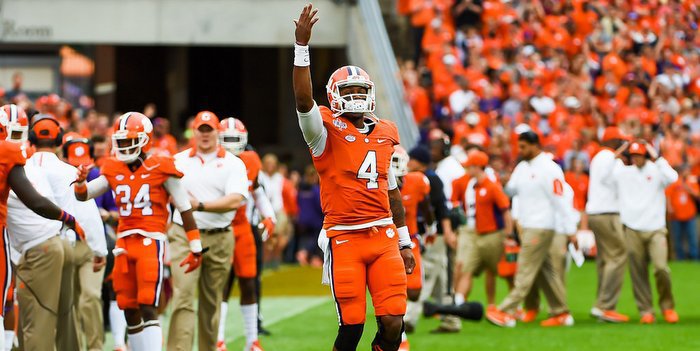 Nick Saban (right) saw first-hand what Watson can do

Auburn and Alabama may be rivals in every sense of the word, but as the Tigers from the Plains prepare for the season opener against Clemson, Auburn head coach Gus Malzahn may turn to Nick Saban for a little advice.

If he does, Saban will have three words of advice for his cross-town rival.

Alabama defensive lineman Jonathan Allen, tight end O.J. Howard and Saban all met with the media Wednesday morning at SEC Media Days in Hoover, Alabama and Watson’s name continually came up as the trio reminisced on their 45-40 National Championship victory over Clemson and looked ahead to the 2016 season.

Saban compared Watson to Cam Newton – one of the NFL’s hottest players and one of the Clemson signal caller’s mentors.

"Clemson is a very talented team with a great quarterback who probably is the most significant player in impacting the game that we've played since Cam Newton," Saban told the media Thursday morning. "This guy can run, he can throw, he can scramble, and he can extend plays. He's very accurate as a passer. He’s very well coached."

Alabama’s head coach went on to say that to beat Clemson you have to limit its playmakers and it all starts with the junior quarterback.

“I don’t really know who all they have coming back and all that kind of stuff, so I can’t give you that scouting report, but I know they have some significant players you have to manage in the game if you’re going to have a chance to be successful against them,” Saban said.” 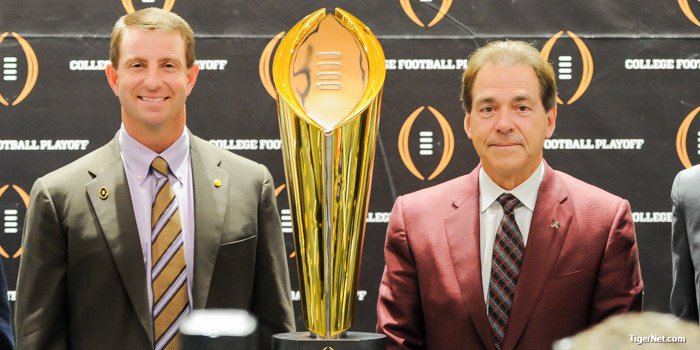 Nick Saban (right) saw first-hand what Watson can do "

Allen didn’t feel as though he and his teammates played up to Bama’s standards, but he was also quick to give Watson credit for a performance in which he completed 30-of-47 passes for 405 yards and four touchdowns (one interception) and carried the ball 20 times for 73 yards.

“He’s the best player quarterback-wise I ever played against,” Allen said. “There were things we could have done to contain him better, but when a player is on during a game like that, it’s going to be very hard to contain him or stop him. All the props to him — he had a heckuva game. His ability to elude pressure and his accuracy on the run, I’ve never seen anything like that,” Allen said. “He was just an outstanding talent, and I have to give him credit.”

The advice for Auburn’s defense?

Howard, who had the game of his career catching five passes for 208 yards and two touchdowns, said Auburn would need to prepare itself for a fast-paced, physical game.

“Be ready to play a tough game,” O.J. Howard told the media. “Clemson is a great ball club, those guys compete, they play fast and have a great quarterback, great defense. That’s really the only thing I can say.”

When the two Tigers square off on September 3rd at 9 p.m. EST, Allen will be rooting for his conference and in-state rival.

“You’ve always got to go for the SEC team,” Allen said. “I think Auburn has a good chance. It’s at the beginning of the season, so we don’t know how teams are going to be, we don’t know how chemistry is going to fight in, so we’re excited.”