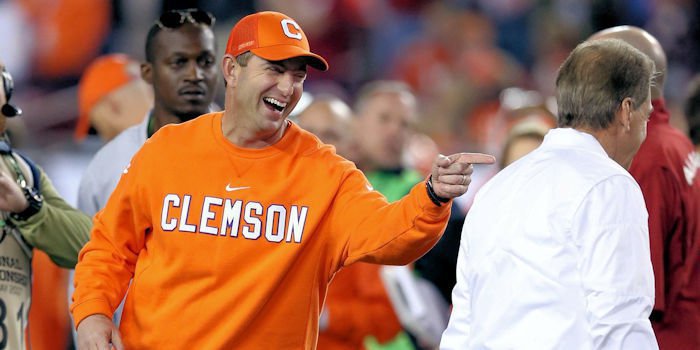 Clemson head coach Dabo Swinney received a contract extension and raise last year, following the team’s first appearance in a National Championship game since 1981. Now that the Tigers have won a title, what will Swinney be worth?

Altogether, the eight-year deal running through Jan. 31, 2025, is scheduled to pay Saban $65 million, not including incentive bonuses that could total $700,000 each year.

According to the USA Today, the $11.125 million that Saban is set to receive for this season will be, by far, the greatest amount paid to a college athletics coach since USA TODAY Sports began tracking the compensation of football and men's basketball coaches in 2006.

Swinney also received $1.4 million on bonuses after last season. He earned $700,000 in bonuses with another 11-win season, claiming the Atlantic Coast Conference championship and reaching the Playoff.

Will the Clemson administration attempt to re-work Swinney’s contract? Probably, but not in the same sense that we saw a year ago when Swinney’s contract was re-worked. We spoke briefly with Athletic Director Dan Radakovich at Wednesday’s Prowl and Growl, and he said the two sides were talking but in no hurry and really no progress has been made.

Perhaps helping delay the cause – Mike Brown, Swinney’s longtime agent, passed away earlier this year and Swinney has hired a longtime friend to help with accounting and his All In Foundation. From everything we’ve been told, Swinney hasn’t hired an agent and might handle the negotiations on his own.

If the two sides reach an agreement, look for Swinney to receive a modest raise with perhaps another year or two added to the end of the current contract, putting him in the $5 million per year category immediately.

Just for the sake of discussion - none of us know what will happen with Swinney's contract - what do you think he is worth? Would you re-do the contract and add an extension, or would you leave the current contract as is? If you gave him a raise, what would you pay him per season?