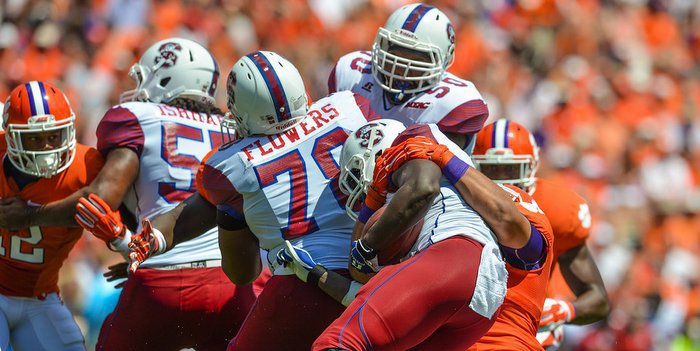 South Carolina State opened the season with Central Florida and Louisiana Tech, but head coach Buddy Pough has paid a lot of attention to what Clemson has – or hasn’t – done so far in 2016.

As a result of Clemson’s lack of success on offense, Pough expects his Bulldogs to walk into a buzz saw Saturday afternoon in Death Valley.

Pough told The State earlier this week that the intensity South Carolina State will see this weekend will be markedly different than the one Troy saw just a week ago.

“We know enough about Clemson to understand that they’ve probably not played as well as they can play. It’ll be interesting to see how they react to us,” Pough told The State. “I think this may give them a little different sense of urgency. I really do get the feel that they’ll try to really get after us. We’re going to try to do the same to them, but at the same time their get-after-it might be a little bit different than our get-after-it.”

The longtime South Carolina State head coach said he knows Clemson head coach Dabo Swinney will have his squad more focused than they were during the first two games of the season.

“Our mission is to continue to improve. We’re trying to get through these first three games and into our regular conference schedule,” Pough said. “We’d like to come out with some confidence and that means we’ve got to have some success and be able to play with these guys. I think that in itself is something we can take some pleasure in, but I think it’s a bigger task now than it would’ve been because Clemson hasn’t played all that well. I’m sure that they’re searching themselves for that vibe that they had last year. It’s going to mean that are going to be more attentive to detail and their process than they would’ve been. We’re going to have our work cut out for us this Saturday.”

If Clemson plays like the team everyone expected them to be coming into the season, Pough said the Tigers have the ability to “knock the Bulldogs crazy.”

“They’ve got the ability to really come out and knock us crazy if they really decide to be that way,” Pough said. “We want them to just kind of come out and just kind of go on through the motions and get on out of there, which would probably be the best case scenario for us.”

Pough didn’t mince words when he described the Bulldogs’ early season schedule, but he did say he hopes it helps further down the road as South Carolina State enters conference play in the MEAC.

“We’re on to the next part of this three-week schedule from you-know-where,” Pough joked. “What I’m hoping is that the sense of urgency that this part of the schedule has created for us will benefit us in ways that we can draw on for the rest of the season he said.

One thing playing on the road at Clemson does is gets South Carolina State players in front of NFL scouts, something that has helped get two former Bulldogs into the league.

“We say a bunch that the reason Javon Hargrave (who was drafted in the third round by the Pittsburgh Steelers) is where he is now is because what happened with him the time that he was there. He played really well against the Clemson guys and the Clemson guys said that,” Pough said. “They said that he was one of the better players that they had played against. In situations like that it gives you a chance to legitimize yourself.”