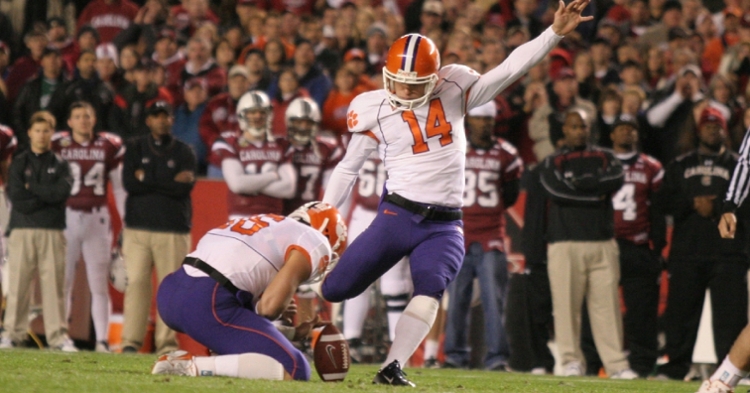 Mark Buchholz beat the Gamecocks in 2007

TigerNet reached out to several former players and asked them to recount their favorite rivalry memories. We told them it could be serious, it could be funny, and it could even have some smack talk.

Corey Crawford - My favorite memory of this rivalry is breaking their streak back in 2014. Being a part of that was special and set the tone for what we have seen in the past five going on six years. Most importantly, bringing that trophy home where it belongs and putting little bro back in his place.

Mark Buchholz - The most memorable moment for me, having not grown up in the rivalry was after the game in 2007. I was spending time with my family and extended family outside the locker room. I was talking to my immediate family and many cousins that attended South Carolina. I started feeling a tap on my lower back, thinking it was a small child, I didn’t immediately turn around. After it continued, I turned around to see a sweet elderly Clemson fan (she had to be in her 90’s). She was crying/sobbing and said something like, “I live in Columbia and I just want to thank you for making that kick so I don’t have to listen to all these Gamecocks all year long.” We exchanged a hug and it was in that moment that I truly understood what it meant to so many people in the state of South Carolina. I will never forget that moment.

Darius Robinson - Being a Georgia kid, I didn’t really understand how intense this rivalry was until I actually became a part of it. Clemson vs S. Car is a real one unlike many! But at the end of the day, the Upstate runs football in the state of South Carolina and I’ll be there in spirit this week as if I was going to war myself.

Marion Dukes - My most memorable moment was my freshman year 2003. It was my birthday and of course the 63-17 win. I also got in a few plays at the end.

Jock McKissic - 2006 game, I was a sophomore DT, and Senior DE Gaines Adams batted the ball into the air on a third down, late in the 2nd quarter. I caught the INT & barreled down the field towards the West endzone. Gaines followed me down the field, blocking and holding off Kenny McKinley, allowing me to score an 82-yard TD! The play put us up going into halftime. It was #1 on Sports Center that night & probably would’ve been in the running for Game-changing play of the year, had we pulled out the victory.

Tavaris Barnes - My junior year we went there, and their stadium was rockin'. I mean electrifying and the fans threw beer bottles on the field that game. I will never forget how classless they are (lol).

Robert Smith - 2014 South Carolina at Clemson will always be one of my most memorable moments. South Carolina had beaten us 5 years in a row. It was senior day and my last game in the Valley. It was 4th and 1 on like our 30 to 40-yard line. I made the stop to get a turn over on downs. I woke up in the middle of the night to study South Carolina 4th and short calls. QB sneak had a high percentage and a high percentage going to the left of the line. After the game, because we broke the streak you literally saw Clemson fans crying because we ended the streak! It was a memory I will always remember as my last in Death Valley.

Rod Byers - For me, it’s definitely when we ended the streak in 2014. Watching Deshaun lead us with a torn ACL was unlike anything I had seen. I lost my grandmother that week and missed the whole week of practice, but the team welcomed me back with open arms and despite not practicing, Swinney kept me a part of the game plan playing H-back/TE. Very emotional win for me that day. I had just lost my grandma but sharing that moment with my brothers gave me much needed peace.

Rennie Moore - How much I hated hearing that damn bird when we played at their house but how sweet it was to hit their players every chance we got!

David Beasley - My favorite memories from the Clemson and Shame Cocks rivalry, is when we had beat them at home my senior year. To see their faces after they left walking off the field. It was the greatest joy on earth and something I’ll always remember. Serving up a hot piece of humble pie. Because that will be the last time you ever have a good run of games on Clemson ever in your school lifetime.

Chad Carson - I’ve got a couple. During the 2000 season, the Clemson-SC game came down to the wire. Woody Dantzler threw a long pass to Rod Gardner with only seconds left to set up a game-winning field goal. Then Aaron Hunt made the field goal to win the game with no time on the clock. It was one of the most exciting finishes I’ve ever been a part of.

The second: During my senior year, 2001, we lost to the Gamecocks during one of Lou Holz’s better years. But I’ll never forget walking off the field just as the game ended. A middle-aged Gamecock fan ran up to me, put his finger in my face, and told me to get off his ******* field. Apparently losing for so many years before that had gotten to him.

Jarvis Jenkins - I remember my first game in Columbia. The first impression of Gamecock nation was me coming out of the visitor tunnel and getting golf balls and beer bottles were thrown at me. We won that game. That’s when I knew the rivalry was real.

Brian Tillotson - Both Brandon Bennett and I played against each other all thru High school, (Berea in Riverside) & when we both got to college and realized that we were playing for opposing schools, we knew it was inevitable that we would be on the field again facing each other. In 1994 we had the opportunity to meet once again at Death Valley. Most people thought that we were cussing each other out, but instead, we were so excited to see each other on the field that it was like long-lost brothers seeing each other! The outcome might not have been what we wanted at Clemson, but seeing my brother once again and playing against each other are memories that we hold dear to this day.

Brandon Thomas - Well in 5 years, my class never got the chance to experience a win versus those Cockies. So, my personal experience wasn’t a real bright spot (lol). I do take gratitude in knowing that I received the offensive MVP for that last game that I played down there. I feel like that was one of my best games I’ve played as a Tiger. In fact, I think that game, along with some others, were my stepping stones to getting drafted.

Chad Jasmin - My most memorable about the SC vs Clemson would be 2003 game when we went in their house & put up 63 points & when we looked up at halftime all their fans were just about gone. It’s was like we scored on every play that was called that night. Forever Clemson Tiger vs South Carolina 63-17 in your house.

Quandon Christian - My favorite memory from a Clemson-South Carolina game was a game that I didn’t even play in. It was the year Deshaun tore his ACL and willed us to victory on one leg. Watching that from the sideline was unreal because I’ve never seen anything like it in my life. Watch Clemson take back over the series I couldn’t be happier that day. I remember after the game talking to Coach V briefly and him telling me that game was for us. I can’t put in words what that meant to me. They had their little run but THIS STATE BELONGS TO THE CLEMSON TIGERS.

Chris Chancellor - My most memorable game is 2007 vs USC. The very first play of the game USC coach Spurrier decided it would be a good option to test PT on a deep post. Well, I intercepted the pass and set the tone for the game and we won on a field goal by Mark. My fav game vs USC was 2008 when we beat them in the rain at home with Dabo as interim coach. That win was big for coach Swinney and to be named IFC MVP defense player for the 2nd time in 2 years vs USC was outstanding. Go Tigers.

Michael Hamlin - My favorite game against Carolina was my senior year. As a team, we had a lot of adversity, but we pulled together and had a complete game and had a lot of fun as a team. Also, I got an interception that game.

Bobby Hutchinson - I will never forget the 2008 Clemson/USC game. I was a senior on a team with high expectations coming into the 2008 season. Needless to say the 2008 season didn’t start very well for Tiger nation. Coach Swinney was named the interim head coach midway through the season on October 13th. I remember coming into the USC game needing a win to become bowl eligible and players felt that if we could beat USC then it would solidify Coach Swinney as the permanent head coach. What a way to end my Clemson career than by beating USC on senior day and watching the team carry Coach Swinney on their shoulders after the game. To this day, I believe that having a dominant win over USC in the regular-season finale secured the head coaching job for Coach Swinney. What a way to go out as a Tiger!