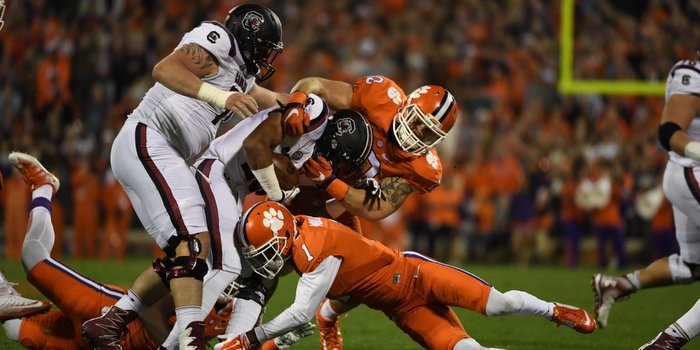 The last time South Carolina visited Death Valley, the Gamecocks made the bus trip back to Columbia seething over a 56-7 thrashing at the hands of a Clemson team that would eventually win the National Championship. And while they won’t quite get into the “Never Again” territory that Jake Bentley uttered later, they are determined another beating like that won’t occur.

Clemson racked up an astounding 40 first downs and had 622 total yards of offense to the Gamecocks’ 218. South Carolina had just 107 passing yards and freshman quarterback Jake Bentley – who took a beating in the first half – didn’t return for the second half.

It was, in a word, embarrassing.

“We got embarrassed,” South Carolina linebacker T.J. Brunson told the media this week. “It just makes you want to come out and play hard and not let that happen again, ever.”

Offensive lineman Donell Stanley said the Gamecocks would have the proverbial chip on their shoulders.

“That’s why we need that chip on our shoulder, everything that happened two years ago and the outcome of that game,” Stanley said. “We weren’t happy about it. You never forget about that moment, so we have to use that to motivate us.”

Head coach Will Muschamp said this week that he thinks many of his players quit.

“I think more than anything, we went up there our first year and flat-out had some guys who didn’t compete, and that wasn’t going to happen again,” Muschamp said. “That was our message for our football team: It’s about competing. That’s the situation we were in. That first year, unfortunately, that’s why we were here. You have to continue to coach through that and continue to build the culture that you want within your organization. We’re much better now than we were then.”

Bentley said it was simply a case of a young team getting out-played by a more experienced group.

“I think everyone knows what happened,” Bentley said. “We didn’t play well. We were a young team that got beat by a team with a lot of experience on it.”

There was a pregame altercation on the field and accusations off the field after the game, leaving a bad taste in the mouths of both teams.

“The last time I was up there, we kind of got into an altercation,” junior running back A.J. Turner said. “Not me myself personally, but a few people on the team got into an altercation in pregame and stuff like that. I know a lot of guys are from South Carolina and people get like real emotional about this game. I know there’s gonna be some stuff, or some things that are gonna happen or some plays that are gonna be made that are gonna be real emotional. So we’ve just got to handle that in the best way possible.”

That’s why the Gamecocks are preaching composure as they ready themselves to enter a raucous Death Valley.

"Coach has been preaching faith and composure all week, especially with some of these young guys, it’s keeping everyone composed," Brunson said. "It’s easy for a game like this to get out of hand because guys are too emotional or they’re thinking too much and trying to make a play when they’re simply not doing their jobs."

It’s all about mental toughness.

"That’s what makes good players good and great players great: mental toughness. It’s really easy to cave in," Jacob August said. "You want to think about Clemson, and you have girls in Clemson talking bad about you that you went to high school with and guys think they’re part of the team, so they’re talking, and in reality, they don’t know what they’re talking about. It’s easy to listen to them, but we’re tough enough to where we’re not going to fall for that.”