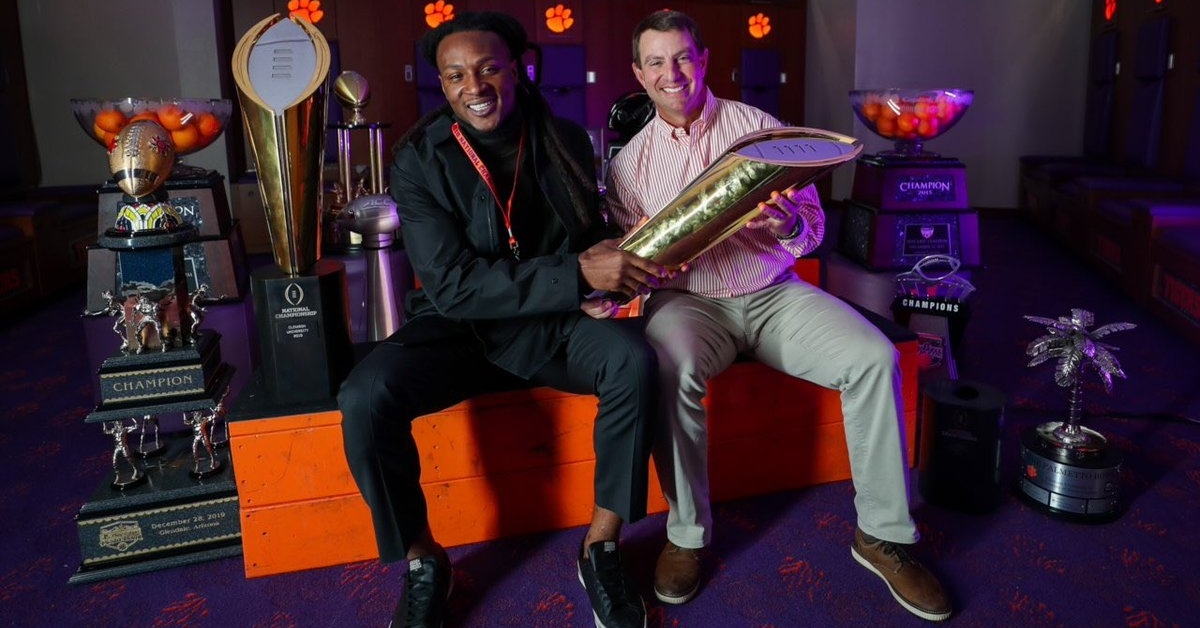 Swinney and receiver Nuk Hopkins at the reunion.

CLEMSON – The best family reunions always end up at somebody’s house with food and conversation until the wee hours of the morning. Dabo Swinney’s Decade to Remember Reunion was one of the best.

Swinney and the football program held the reunion last weekend as close to 200 former players converged on the Reeves Building for the “Decade to Remember Reunion: The Swinney Era, 2008-2018.”

The group had supper in the Poe Indoor Facility before moving the dining hall in the Reeves building.

“One of the best days of my life. I was overwhelmed,” Swinney said. “It was emotional, to be honest with you. I was overwhelmed at all the guys that came. We had a big BBQ at six in the indoor (facility) and then they had the dining hall set up like a big den. There were over 200 people in there. It was pretty emotional to get up and to see all of those guys. Because to me, it seems like yesterday. Mark Buchholz was my first kicker and he is 34 and yet it seems like just yesterday to me.

“When you get in a setting like that it is easy to feel like you are in a team meeting and fall back into that relationship. And these are grown men with kids and jobs and mortgages. Nine of the 12 Dandy Dozen were here and it was just a special night. I tried to give them an old-fashioned Coach Swinney meeting like we do on a Friday night. It was cool to be able to talk to the older version of them.”

“They had a ball. I am still recovering to be honest with you. We left the facility after midnight and some of them wanted to go to the house,” Swinney said. “Sammy Watkins and Corico Wright and Garry Peters and Hunter Renfrow and Martin Jenkins all wanted to go to the house. We played basketball until two o'clock in the morning. Sammy is out there in some kind of fancy hightops with bling on them that I am sure he's not supposed to be playing basketball in. There is no telling what they cost. But we are all having a ball and playing basketball and it was just a blast.

“And then we came in about two and (wife) Kath (Kathleen) had pizzas everywhere. So we just had a great time eating pizza and telling stories and laughing at each other. It was such a special moment. And then I look down and it's three o'clock in the morning. And Kath goes, 'No babe, the clocks go forward an hour. It's four in the morning.’ I didn't go to sleep till 5 am. But it was so good to spend time with everyone. But it was great to remind them that they are the foundation for what we have now.”

We started a Dynasty. pic.twitter.com/f90weWE5hu