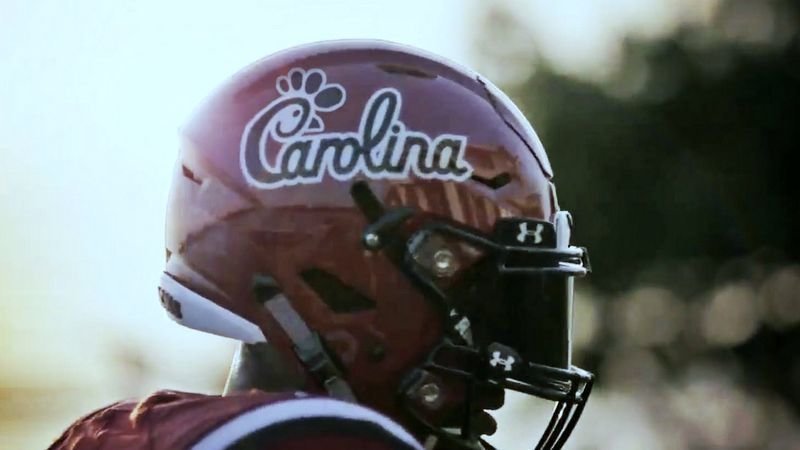 The new logo is marketing genius

Ah, do you smell it? Do you smell it? You know fall is in the air and football season is here when you smell diesel fuel, raw sewage, and an air of hopelessness around Wiliams-Brice Stadium. That’s right, we are embarking on another season of college football, and while this week’s slate of games isn’t the best there are some key matchups to watch.

Down here in Columbia, city officials are trying to clean up the area around the stadium before the opener against Coastal Carolina. The privacy pods that we mentioned last week might have to wait a week before making their appearance – the first two units set out as a test were stolen.

All is not bad in Columbia, however. In case you missed it, the Gamecocks have come out with their 393rd different helmet/uniform combination over the past few years, trying to become the Oregon of the East. The big win for them is Chick-fil-A letting the Gamecocks use their logo on the new helmets. It really makes a lot of sense – a school that has a chicken that gets consumed a bunch using the logo of a company that has a slogan “Eat Mor Chikin.” A match made in heaven, right down to the misspelling.

Now on to some picks, and if you get offended, it doesn’t matter to me because my dad laughs and that is all that matters.

I have a friend on Facebook that is a big Ohio St. fan, and they showed up yesterday to begin their tailgate. That included a big bonfire once the sun went down. Someone called the fire department, but they didn’t find anything because Urban Meyer had already covered it up. (Too soon?) OHIO ST. 51, OREGON ST. 13

The Paladins make the short trip from Greenville to take on a Tigers’ defense that is deep, talented, and restless. Making things worse, money drives the kickoff time and it will feel like the seventh level of Hades midway through the second quarter. The Paladins have a history of knocking off FBS opponents, but that won't be the case here. Sunshine rules the day as Clemson wins easy. CLEMSON 52, FURMAN 3

The 1969 ACC Champions defend their crown for the 49th consecutive year, starting with Coastal on Saturday. The Gamecocks are led by stellar quarterback Jake From State Farm Bentley, who, at the ripe old age of 32 is only supposed to be in third grade. The Gamecocks should build enough of a lead that most of the fans, who leave by the third quarter anyway, can get back to the parking lots and finish what they started earlier. Ahem. If you get my drift. We really do need the privacy pods out there. SOUTH CAROLINA 42, COASTAL 13

Captain Khaki Pants takes his band of underachievers down to South Bend for a game against the Golden Domers. Now, in case you missed it, Jim Harbaugh told the nation why South Carolina hasn’t won a championship since 1969 – the chicken is a nervous bird. He actually told his quarterback to stay away from eating poultry so his quarterback wouldn’t get nervous. Yes, Harbaugh is weird. He’s strange. He’s kooky. He’s…..crazy. But he will win this weekend. MICHIGAN 27, NOTRE DAME 17

Someone needs to check on the volleyball coaches at Louisville because Bobby Petrino has been feeling pretty good lately. Petrino and his band of Cards are talking a lot of smack heading into the opener against Nick Saban and Al – Uh-Bam-A. If you wanna beat Nick, you kinda have to sneak up on him. Keep quiet. Don’t do a lot of talking. Now Nick has all the bulletin board material he needs to have his team believing Louisville’s football team caused world hunger. After the game, Petrino is going to look like he did after the volleyball player knocked him off his Harley. Ouch. ALABAMA 44, LOUISVILLE 16

This could be an entertaining game, or it could be a borefest, right? LSU has had trouble scoring for a long time. Cookie Monster Ed Orgeron and his group have to make sure they take care of the football – the Hurricanes were an average kind of team last season but built an undefeated record because of turnovers and some gaudy jewelry sold by Warren Sapp so he could pay his lawyers. Miami’s quarterback struggled with the concept of a forward pass late last season, and LSU has seemingly struggled with that concept for over a decade. Ugly. Just..ugly. LSU 19, MIAMI 17

The Hokies and Seminoles. This is the premier matchup of the week in the ACC, and this game might tell us a lot about the ACC this season. Not a lot of people are on the Hokies’ bandwagon and Willie Taggart and his staff are in year one in Tallahassee, but this one will still be entertaining. As long as the police there in Tallahassee keep all of the Florida St. players off the police blotter, the Noles win this one and get Taggart started in the right direction. FSU 27, HOKIE POKIE 20