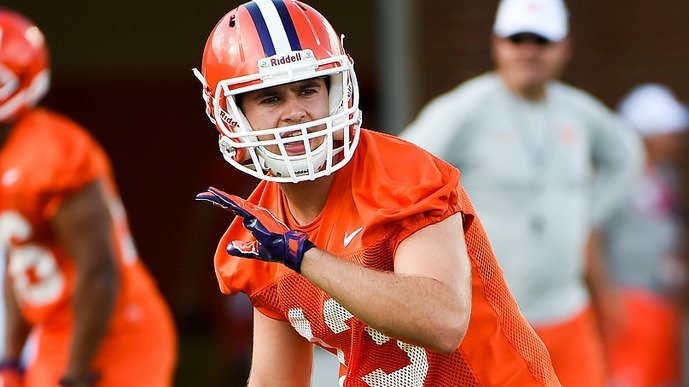 Hunter Renfrow is excited about the start of August camp

CLEMSON – Hunter Renfrow is ready to play football, and he doesn’t care who plays quarterback.

The talented senior receiver spoke with the media following Friday’s practice, and he said that he is excited about the start of August camp.

“The first day is always exciting. A lot of excitement and anxious to get the season going,” Renfrow said. “Get some of these freshmen out here and see what they can do.”

He knows the battle to be the starting quarterback will be a main topic of conversation but says the team doesn’t fall into the trap of wishing for either Kelly Bryant or Trevor Lawrence.

“They are both incredible. We were with them both during the spring and we were with both of them during the summer, so not much has changed. They both can sling it.”

Does he see a difference between the two players?

“Kelly can do things on the ground and is a very good manager. He can put the balls where he needs to, but so can Trevor. And Trevor has a lot of arm. We will see how it goes,” Renfrow said. “We were watching highlights of Deshaun (today), and he had a great arm, but he put so much touch on it. All of the quarterbacks do different things well. Even if you have the best arm, it doesn't mean you throw the best ball.

He is also excited about the new faces at wide receiver.

“It's weird. It's been kind of odd. Ray-Ray (McCloud) and Deon (Cain) got here after me and left before me. With Justyn (Ross) coming in, and DK (Derion Kendrick) came in during the spring, and we have guys like Drew Swinney and Max May that have come in and done a great job,” Renfrow said. “Justyn is a really good player, a lot like Tee as far as ball skills and that sort of deal. He was the number one player in the state of Alabama for a reason, and we can certainly see that in practice.”

Renfrow said it’s hard for him to grasp that this is his last season at Clemson.

“We have a saying around here that the days are long and the years are short. That is definitely true,” Renfrow said. “I feel like I've been here for forever, and I also feel like I got here yesterday. I am trying to take advantage of this last year, whether it's leadership ow whatever the team needs so we can have a great year. For us seniors, it feels like yesterday we were playing in Arizona for the National Championship. Some of these new guys were juniors or sophomores in high school, so it's just surreal from that standpoint.”