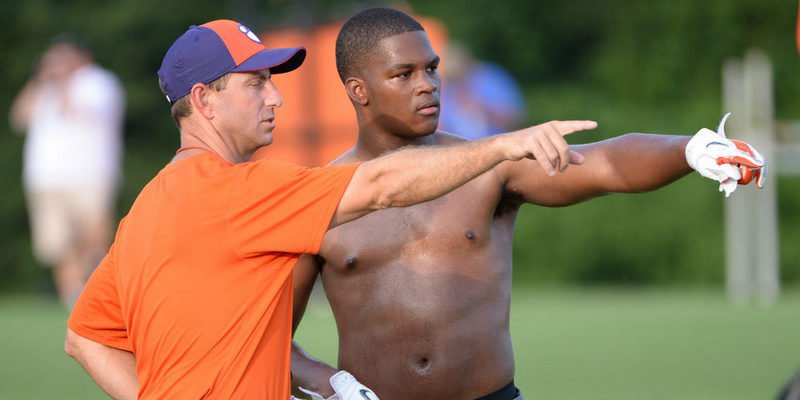 McMillan will look back across the field at Scott and see a coach he respects.

The former 5-star prospect hails from Hinesville, Ga., and chose the Buckeyes over Clemson and Alabama after a lengthy recruiting process. Jeff Scott was one of McMillan’s main recruiters, and spent a good deal of time recruiting the number one linebacker prospect in the nation according to Rivals.

“I know a lot about Raekown. I started recruiting him his freshman year,” Scott told TigerNet. “I went to his high school 17 times throughout the recruiting process from his freshman until his senior year, He is a great player and a great young man. I knew when he was in high school he was going to be a special player, and I believe we came in second to Ohio St. It will be good to see him before or after the game or during the week just to say hello again.”

McMillan said he still holds Clemson in high regard.

“Everything about it. It’s an awesome place,” McMillan said during Wednesday. “They have a great staff; everybody around the university kept it real and really made you want to be at Clemson and go to Clemson.”

It wasn’t the school, however, that resonated with McMillan. It was Jeff Scott.

“One of the best relationships that I built when I was getting recruited was with coach Jeff Scott,” McMillan said. “Certain circumstances made me not go to Clemson, but he never gave me a reason not to like Clemson, not to like the university. Him and his wife, Sarah, they do an incredible job of recruiting guys to Clemson and making them believe that all their dreams can be fulfilled there. Hats off to them. The whole school and organization are awesome, but I felt like Ohio St. was the better fit for me.”

McMillan said Scott showed his true character after his commitment to Ohio St.

“If I make a decision for another school and you’re still checking up on me, that means when I was going through the process and getting to know you, everything that I was thinking was true,” McMillan said. “Hats off to coach Scott. He’s just an incredible guy.”

The two still keep in touch, although it’s not as regular as before.

“Every now and then, my birthday rolls around, and Christmas time, they tell me Happy Birthday and tell me Merry Christmas,” McMillan said. “But we try to keep it at that. I’m here at Ohio State. I’m giving my all to this university. Don’t really have time to worry about outside sources or anything like that.”