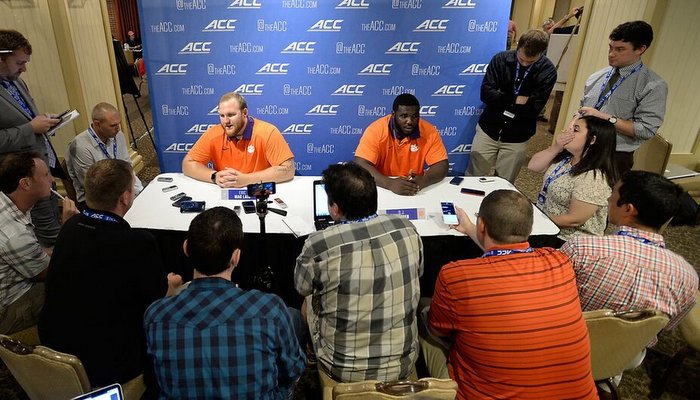 The senior defensive tackle realizes what the Clemson defense lost off of the 2014 squad, but he also sees just how special the 2015 unit can be.

The Greensboro, North Carolina native fielded questions for nearly an hour at the ACC Kickoff earlier this week at the Pinehurst Resort and said despite the losses off of last year’s defense, there are plenty of playmakers still around.

“I’ve got some great guys around me,” Reader told the media earlier this week. “Luckily, all of them are my best friends. We all kind of came in together. Shaq Lawson

Kevin Dodd
RS Jr. Defensive End
#98 6-5, 275
Taylors, SC
View Full Profile are my three other starters. I really love those guys. I love what they bring to the table. They're great players. They've been great players for years. It's going to be exciting.”

Reader said he and his teammates are taking it as a challenge to replicate their performance from last year.

“I say the sky is the limit for this defense,” Reader said. “Like I said, as a defense and a team, we don't back away from any challenges. There's a chip on our shoulders from a lot of doubters out there. We've been prepared. Those guys who left prepared us to come in and step up. We don't think about we lost all these guys. We think about next man up.”

As for the mood of the entire Clemson football team, Reader said they are ready to spot the ball.

“The energy is high. Creating a bond,” he said. “Everybody is excited to go out there and play. From the time spring ended till the time summer started, everybody hit the ground running. It's been a really good summer. To see those guys develop, myself, even, and everybody on the team, it's been fun, really fun.”

And, there won’t be any extra pressure just because the Tigers were tabbed as preseason favorites to win the ACC.

“I don't think we feel pressure much as a team, he said. “I think being the best is something that we were excited about last year. We really know what it takes to get there. We're just excited to really go to work and get back there again this year.”

The only thing standing between Clemson and a run at the College Football Playoff? Clemson.

“I think we're really comfortable. We have this saying that we play Clemson 12 times a year on our schedule,” he said. “If we can control the things we can control, execute our plan, we can live with any outcome we get. We don't really focus on being the targets. We know we're going to get everybody's best shots.”