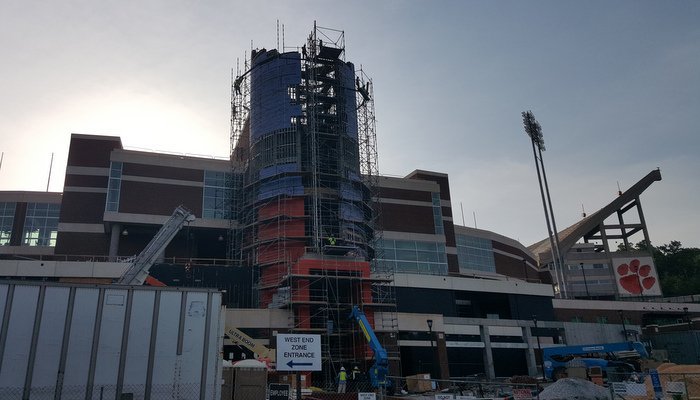 The changes to the WestZone and the new Oculus are evident

Is it a good time to be a Clemson fan? Yes. Yes it is.

David Hood wrote yesterday about how the events of the last week have seemed to dampen some of the enthusiasm surrounding the upcoming football season, and I see his point. But a couple of hiccups can't disguise the positive momentum on campus.

I remember getting a Facebook message from a friend of mine a few years ago who is a die-hard South Carolina fan a few years ago, and following another win by South Carolina’s baseball team decided he needed to message and crow – literally and figuratively – about his Gamecocks. I laughed – I’ve been around David Hood far too long to get wound up about wins or losses, and people who want to talk “smack” with me will be sorely disappointed.

However, his comments resonated with me because he said, “It’s simply the greatest time in the history of our school to be a South Carolina fan! We have football and baseball excelling and winning games and we have a new basketball coach in Frank Martin who is going to be a big winner. On the other side, I can imagine it’s a painful time to wear orange!” The Gamecocks were in the middle of a streak of five in a row on the gridiron and the back-to-back national championships in baseball were still fresh. It was a good time to be a Gamecock to be sure.

Fast forward to this past week. In order to get inside the WestZone and the team room, we in the media had to park off Centennial and go in through Gate 13 and onto the third floor of the WestZone before taking an elevator down to the second floor. No biggie – everybody associated with the WestZone has had to deal with the ongoing construction since the end of last season. Even my old haunt – the press box – is being redone and we will be in a new (and hotter) location in the stadium this season.

The work on the outside of the WestZone and on the oculus goes on daily, and every time I drive onto the campus there is construction everywhere. The oculus is beginning to take shape, and each time I see the progress I wonder if it will be done by September 5th. Then we walked into the team room and set up for the press conference introducing Monte Lee

Lee attacked the podium (so to speak) and had a speech and an agenda carefully prepared. The man is a force, and a friend in the media later texted me that, “I think Monte has the Dabo gene.” Indeed he does. In fact, Lee’s demeanor during the press conference reminded me a lot of Swinney. It doesn’t mean he is going to win a single game at Clemson, but it means that he does have the “it” factor. Walking out of the press conference, I had the feeling that the Clemson baseball program is in good hands and that better days are ahead.

As we walked out of the WestZone and got into the car, I looked over and saw the changes being made to Littlejohn Coliseum. I can look over and see where the new football operations center is going to be. Changes are being made at Riggs Field. Change is everywhere.

Coaches like to talk about momentum and how momentum can mean the difference between a win and a loss. Momentum can also carry a program, and right now it looks like Clemson has a lot of positive momentum heading into the hot days of summer. The ACC Football Kickoff is still a month away and fall practice is six weeks away, but most national college football shows and preseason magazines all mention Clemson when it’s time to talk about winning the ACC and perhaps making a run at the College Football Playoff.

Swinney has the players. The facilities Clemson has are being updated. The football operations center is on the way. He has the coaches. He has the schedule. Football is headed in the right direction. Basketball took a step back this season, and this will be a weird season with the Tigers playing home games in Greenville. But the renovated facilities and what looks like improved recruiting makes me think basketball might be about to turn the corner. And we’ve already talked about baseball – Lee seems like the kind of guy players like to play for.

Change is everywhere on campus, and most of it is for the better. This season on the gridiron should be exciting and memorable, and the other two major men’s sports need to catch up and ride the wave of momentum. During the string of losses to South Carolina, Swinney told anybody and everybody that rivalries change, that one team can catch momentum or a spark and ride that wave for more than a season.

Good time to be a Clemson fan? Yes. Yes it is. The fun seems like it is just beginning.