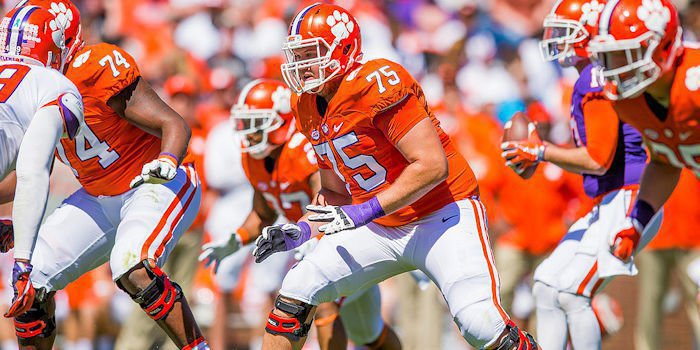 CLEMSON- From his decision to return to Clemson to where he will spend spring break, Mitch Hyatt is just different.

The 6-5, 300-pound left tackle made the decision to come back to school for his senior season and it was a decision that really wasn’t all that difficult.

Hyatt told TigerNet last week that there was still work to be done at Clemson – both on the field and in the classroom – before he felt like he was ready to move on to the NFL.

“It really wasn’t hard for me. I just didn’t feel like I was ready,” Hyatt said last Wednesday. “I didn’t think I was physically prepared, and I just wanted to make the most of my college experience, both physically and mentally. It wasn’t that hard for me to decide to come back and finish out my education.”

The Georgia native is one of the few players to come in and start right away at left tackle, but he said there’s still plenty of improvement that can be done.

For his week away from school and football, Hyatt will spend it at Disney World embracing the magic of the ‘Happiest Place on Earth.’

“I’m going to Disney with my girlfriend, so that’ll be pretty fun. My favorite is probably Animal Kingdom," Hyatt said. “I mean I’m more a fan of the experience and the magic as they say, but yeah its more the experience I enjoy.”

On the first scrimmage

“I mean, I just think the intensity of the scrimmage. Coach Swinney was saying that every play needs to be super aggressive, and I just felt that today when we were practicing, and it makes it fun in a way”.

On the freshmen offensive linemen

“Out of the younger guys, they all kinda shine to me, as far as the offensive line goes, Blake (Vinson), Noah (DeHond), Jackson (Carman), Jackson’s looking good, they’re all improving every day, it’s fun to watch”.

On being able to help the younger players along

“Just take the coaching, you come out here and they throw a lot at you, and you’re new at all of it. What it is, is you just have to take it all and just absorb it, try not to get frustrated when they are coaching you. It can be difficult, but I mean you just gotta keep going at it”.